GUEST WRITER. Fellow Icelandic comrade Arnar writes about his impressions of Mein Kampf and the struggle between Marxism and National Socialism. This is part 1 of 2. 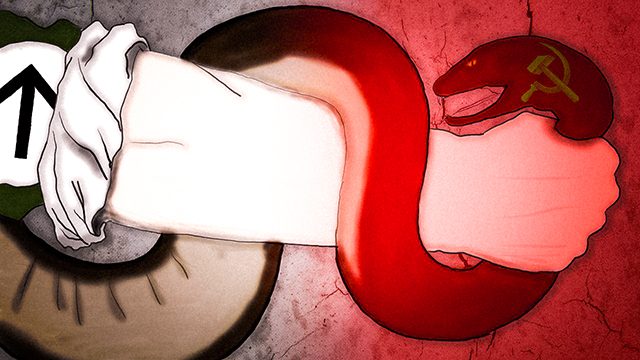 “The conflict which is going on regarding the true view of man and the world will be brought to an issue rather by men of the prophetic type than by dogmatists and philosophers.”

Throughout Mein Kampf, Adolf Hitler describes what he calls a world-concept, or Weltanschauung, which is basically a world view, but when he uses the term it means an all-encompassing social, philosophical and political idea, that has become politically organized. It encompasses ideas about economics, history and the nature and destiny of man. There are two fundamental world-concepts in Mein Kampf, one that was dominant in the 1920s, namely Marxism, which he also refers to as the international world-concept and social democracy, and the other is the one with which he seeks to replace it, that is National Socialism, also referred to as the race-based world-concept. These concepts are mostly dealt with in chapters one and five of volume II of Mein Kampf. This essay is primarily, but not exclusively, a commentary on those two chapters, and how the two world-concepts are presented.

What is a World-Concept?
According to Hitler, a world-concept is far more than a political party that works within the system of democratic party politics. World-concepts “are intolerant and cannot be satisfied with the role of being a ‘party among others.’ They arrogantly demand complete and exclusive recognition for themselves and a complete transformation of public life so that it will submit to their views.” The world-concept does not tolerate the existing state of affairs and seeks to do away with it, if it does not conform to its will. Political parties compromise their principles but, “World-Concepts never compromise.” Whereas political parties also accommodate their views to their adversaries for agreeableness, “World Concepts proclaim their own infallibility.” Whereas the program of a purely political party conforms to what is held to achieve success in the next election, “the program of a World-Concept is a formula that declares war on an existing order, an existing state of things, and an existing World-Concept.” Hitler admits that it’s difficult to tell where the difference lies between a religious and a political world-concept.

The two world-concepts, international Marxism and the race-based National Socialism, are diametrically opposed to one another. For Hitler, the former would lead to the destruction of mankind, but the latter to its salvation. In the 1920s, Marxism was long established, and well organized and financed, but the race-based idea, despite having popular support, was disorganized and had no clear aims. Many parties and groups in the so-called Völkisch movement competed for support from German nationalists. Hitler thought that the disunity of the right in the face of a united Marxist front was deadly. He saw it as his mission to unite the German nationalists, give the race-based world-concept a clear and practical aim, and organize it politically so that it could fight Marxism head on.

“Marxism’s ultimate goal is and always will be the destruction of all non-Jewish nation states.”

In volume one of Mein Kampf, Hitler describes how he became politically and racially aware in Vienna. Working in a construction job, he recalls how he was harassed by members of a union. When he began to inquire into the unions, their nature and aims, through political pamphlets, newspapers and speeches, he slowly realized what Marxism was:

When I began to understand, fear and horror crept over me. I saw a teaching compounded by ego and hatred, which according to mathematical law could very well lead to victory, but would then lead to the end of humanity as well.

The Marxists targeted the working classes with a promise of a better future for them, but Hitler saw it as a “disease masquerading as social virtue and the love of one’s neighbor—a disease which humanity must free the earth from or the earth would soon be freed of humanity.” During his time in construction in Vienna, Hitler also became aware of the “connection between this doctrine of destruction and the nature of a people.” That is, the Jews. Hitler wrote about how the Jew pretends to have compassion for the plight of the working classes and how he has studied their actual and perceived problems to win their confidence. The Jew then “arouses the desire for change. With infinite shrewdness, he stirs up the urge for social justice, an innate desire that is sleeping within every Aryan.” Once the working classes are inflamed with passion…

…the Jew turns it into hatred toward those more fortunate and puts the stamp of a very special World-Concept on the battle; he builds a philosophy designed to correct social injustice. He founds the Marxist doctrine.

But a closer study of Marxism shows that its intent is in fact “extremely evil,” for the goal of Marxism is simply “impossible to accomplish” as many “good people” have observed. Hitler describes the Marxist doctrine as “an inseparable mixture of reason and absurdity, but it is always arranged so that only the absurd parts could be put into practice and never the parts of reason.” One of the fundamental problems he saw with Marxism was its absolute denial of the value of the “individual and of the nation and its racial substance”, and so “it destroys the basic foundations of all human civilization.” Hitler then declares this to be:

…the true core of the Marxist World-Concept, if this creature of a criminal mind can be called a “World-Concept.” The destruction of individuality and race removes the primary obstacle that prevented domination by the inferior man, the Jew.

Hitler held that if we denied that the races varied in their creative powers, it would lead to a denial of the unequal creative powers of individual men. But the ultimate aim would be “the creation of a tyranny of international world finance”, by which he meant “Jewry!” Hitler writes: “The Jewish doctrine of Marxism denies the noble goal of Nature and sets mass and dead weight of numbers in place of the eternal privilege of strength and power.” Marxism denies the individual personality, the nation and race and therefore deprives mankind of the essentials needed for maintaining civilization and for survival. “As a foundation of the universe, Marxism would be the end of any order conceivable to man. The result of applying such a law could only be chaos,” Hitler writes. He then makes a bleak prediction: “If, through his Marxist faith, the Jew conquers the peoples of this world, his crown will be the death and destruction of all mankind. Earth would again move uninhabited through space as it did millions of years ago.”

To achieve its aim, Marxism has to undermine the old order first. He described it thus:

[Marxism] began its constructive work by practicing criticism and has continued for seventy years. And how destructive it was! This corrosive criticism continued until the constant gnawing of the acid undermined the old state and brought it to collapse. Only then did the so called “constructive work” of Marxism begin.

This sounds so familiar. Marxism was not created in a vacuum. It could only come into being in a world that was already decaying and already infected with ideas similar to it. Hitler describes the role of Karl Marx thus:

…international Marxism itself is just the transformation, by the Jew Karl Marx, of a long existing World-Concept into a definite political profession of faith. Without the widespread pre-existing foundation of such a poison, the amazing political success of this doctrine would never have been possible. Among millions of people, Karl Marx was the one man who, with the sure eye of the prophet, recognized the poisons essential to his plan were already in the swamp of a slowly decaying world. He separated and identified those poisons, like a black magic wizard, to make a concentrated solution he could use to speed the destruction of the free nations on this earth. All this was done to serve his race.

Hitler says that the privileged, or bourgeois, classes are also to blame for the success of Marxism because they never cared for the workers and opposed even the slightest amelioration of their condition. This Hitler saw as an unforgivable crime against their own people, and it drove the workers into the open arms of the Marxists who pretended to care for the workers and their needs. Resistance by the privileged-class is also futile because:

Marxist doctrine is the extract of the intellectual soul of today’s universal World-Concept that is boiled down into a concentrated form. For that reason alone, any struggle against it by our privileged-class is impossible and I would even say such a fight would be ridiculous. The privileged-class world is already saturated with all these Marxist poisons.

The privileged-class is also already devoted to a similar world-concept as the Marxist one, which differs only in degree. The privileged-class is already Marxist, but according to its own weak character thinks it can control and dominate the movement and stay on top of it. This is an illusion, for “true Marxism works day and night to deliver the world into the hands of the Jew.” The bourgeois political parties are too busy with the usual party politics and keeping their seats in the parliament, unmoved by higher ideals, that in the face of Marxism they don’t stand a chance: “The privileged-class camp of politicians cannot draw enough spiritual strength from this kind of self-indulgent dealing to fight a battle with the organized power of Marxism.” These delusional “snake-oil-salesmen, who are supposed to represent the white race” use the rallying cry of western democracy against a doctrine that is designed to destroy democracy. Little do they know that “Marxism is the means to an end, and that end is the destruction of Western Democracy by paralyzing the political body…” Hitler adds:

“…how crazy it was to think that one can resist the Jewish world-conquest with the tools of Western Democracy.”