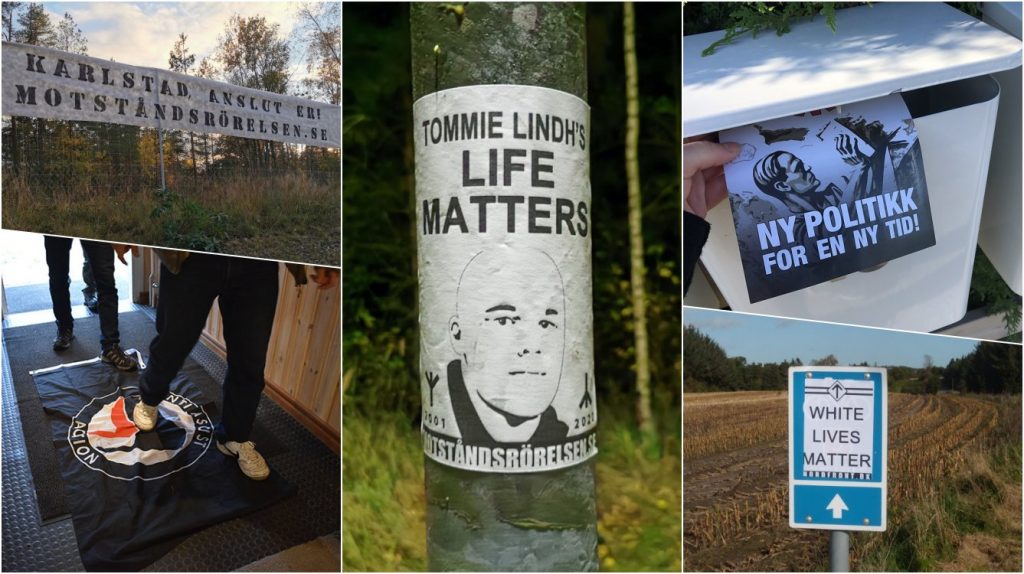 Member Group 2 from Nest 5 hung up a banner on wildlife fencing along the E18 road in Karlstad on 14 October. 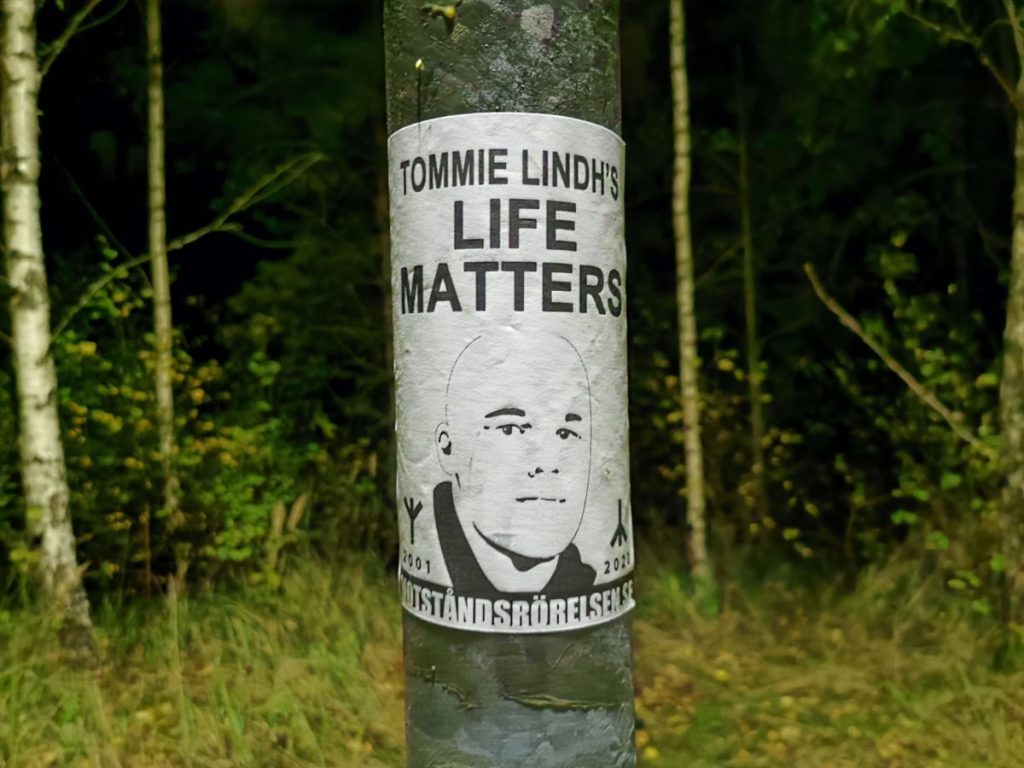 Basic activism continued in Luleå on Sunday, 11 October, with two different banners being hung up above and beside busy roads. We will never stop spreading the truth to the people! The struggle in Norrbotten goes on! 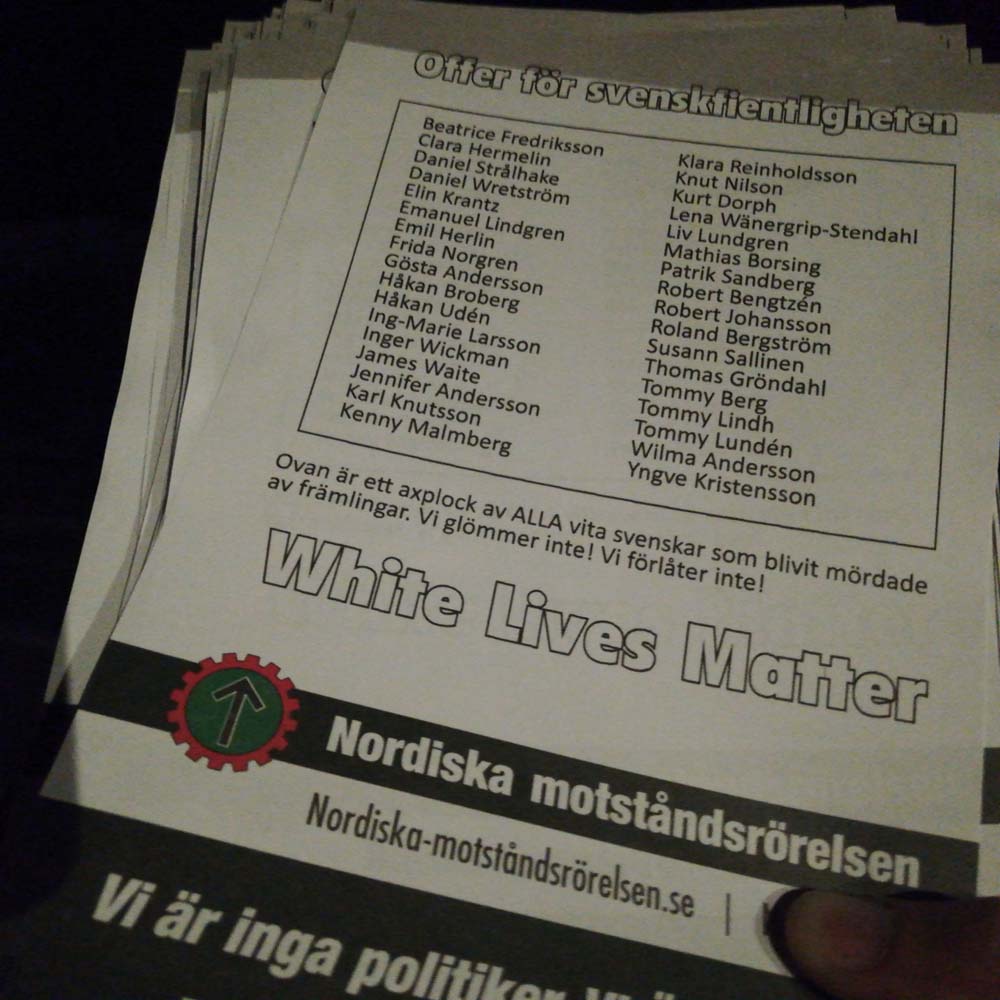 Monthly meeting and lecture in Nest 2

Nest 2 held their monthly meeting on Saturday, 10 October. The nest members were welcomed by a new doormat, which was used extensively.

The lecture was followed by lunch, together with the monthly meeting.

As Nest 2 recently arranged Nordic Days, the event was evaluated and suggestions for improvements were discussed. The meeting also included the development of ideas and plans for coming activities to further strengthen the group.

Stickers were placed around Luleå throughout the week.

Leaflets were delivered in the Ingsberg area of Nässjö on Wednesday, 14 October. Ingsberg is a quiet area when compared with other parts of Nässjö, where muggings, drug deals, car fires and sexual harassment have increased considerably. It is therefore highly relevant that the people of Nässjö be reminded of the Nordic Resistance Movement’s existence and our desire to change the negative developments ravaging our country. 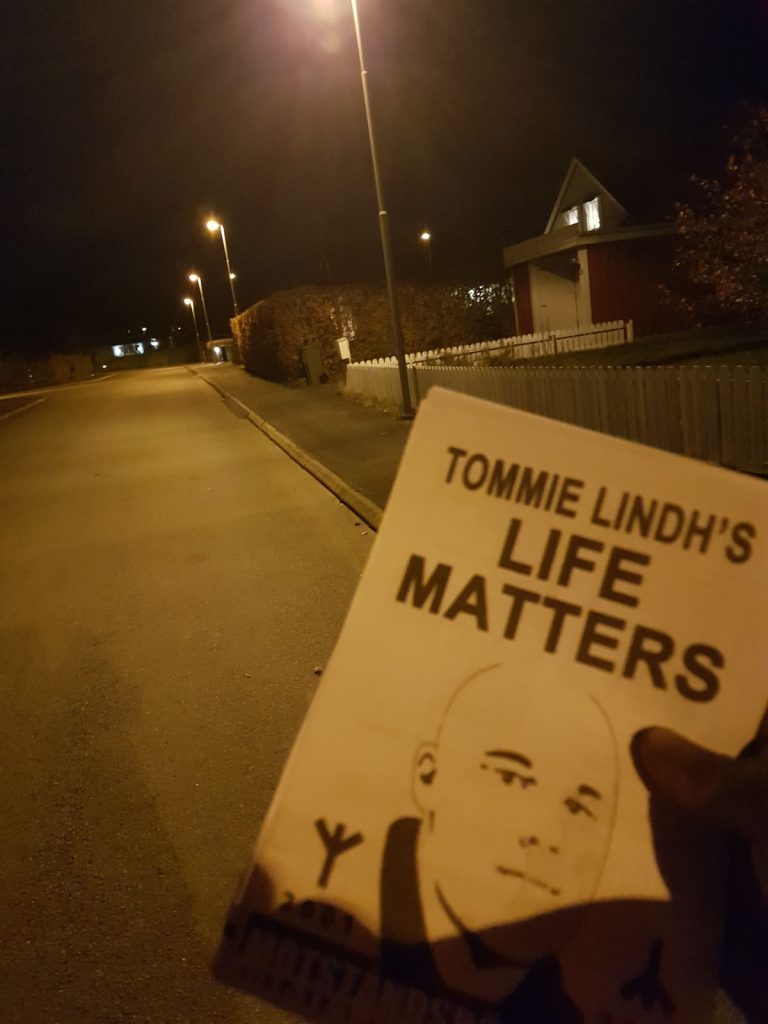 Member Group 2 from Nest 5 met to distribute leaflets in the Norrstrand district of Karlstad on Sunday, 11 October. Around 600 leaflets were delivered in total.

Activists delivered leaflets in Bottnaryd on the morning of 17 October. 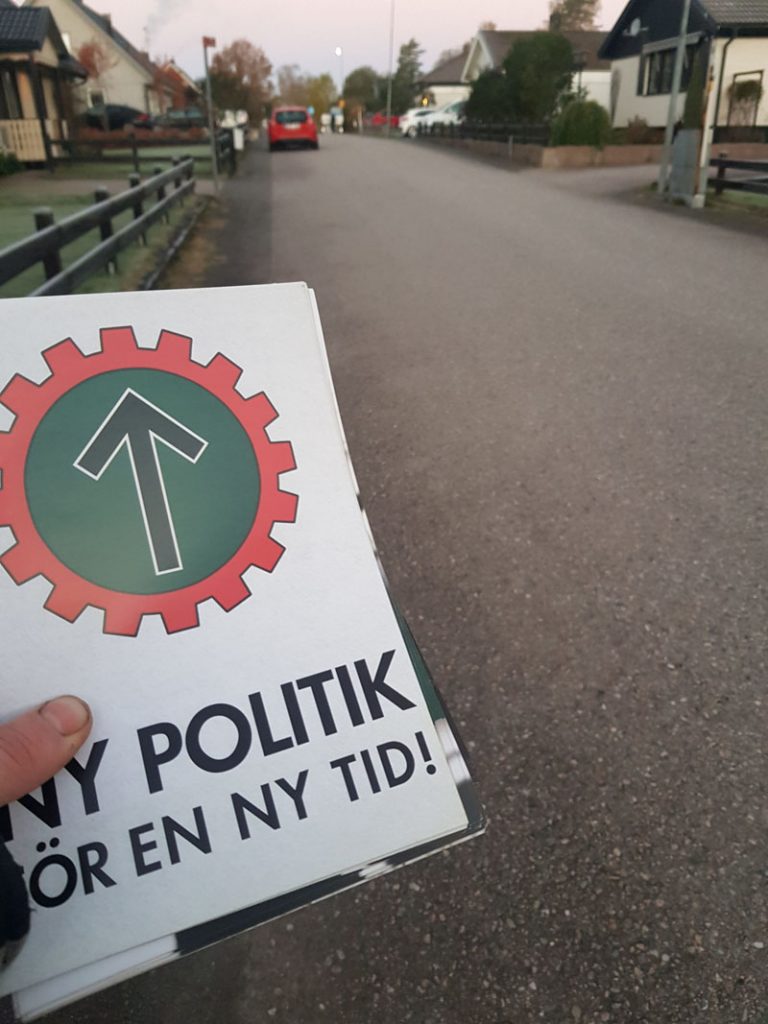 Paedophile activity cordoned off in Täby

On the evening of 17 October, members from Nest 1 cordoned off Täby library after it arranged an “Among dragons and drag queens” event for children. The organisers described the activity as “a confetti bomb of glitter and transgender transformation that offers games and engagement in the enchanting world of fairy tales”.

In addition to cordoning off the library, the members put up a notice declaring that the Resistance Movement takes the side of the innocent children against the system, which wants to brainwash them with disgusting pro-paedophile activity under the auspices of the municipality.

During Week 42, almost a thousand leaflets were printed detailing some of the White Swedes who were murdered by foreigners over recent years. 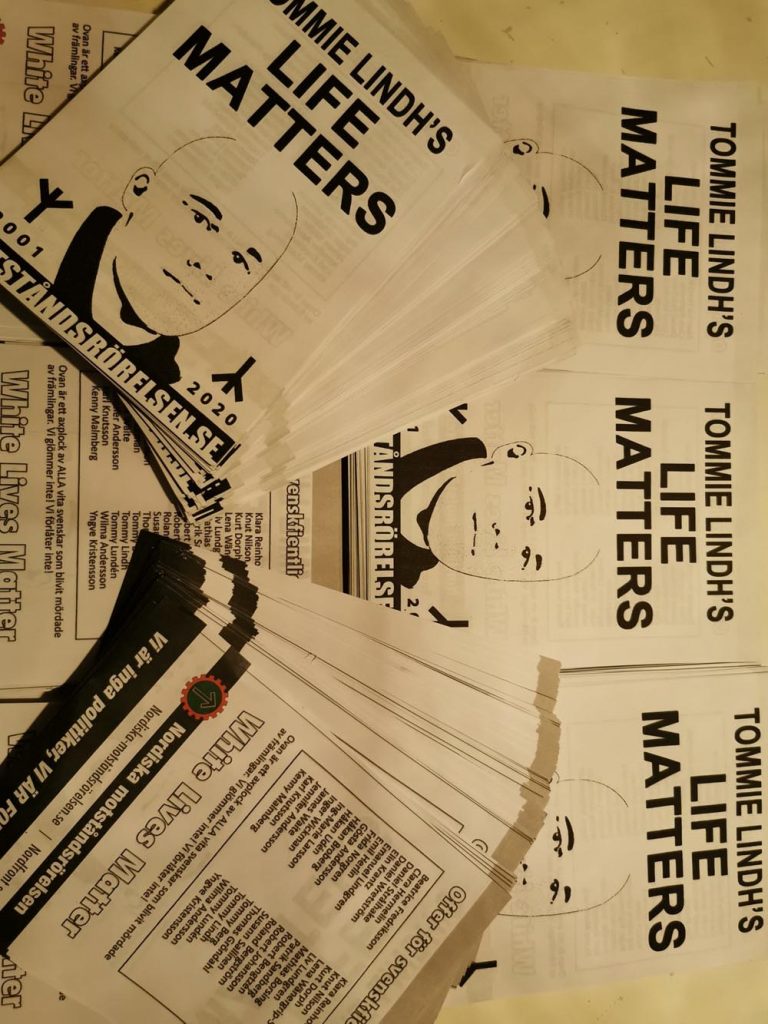 Comrades from Member Group 1 met to spread the National Socialist message in Dingle, northern Bohuslän, on 17 October. Hundreds of leaflets were delivered during the frostbitten evening. 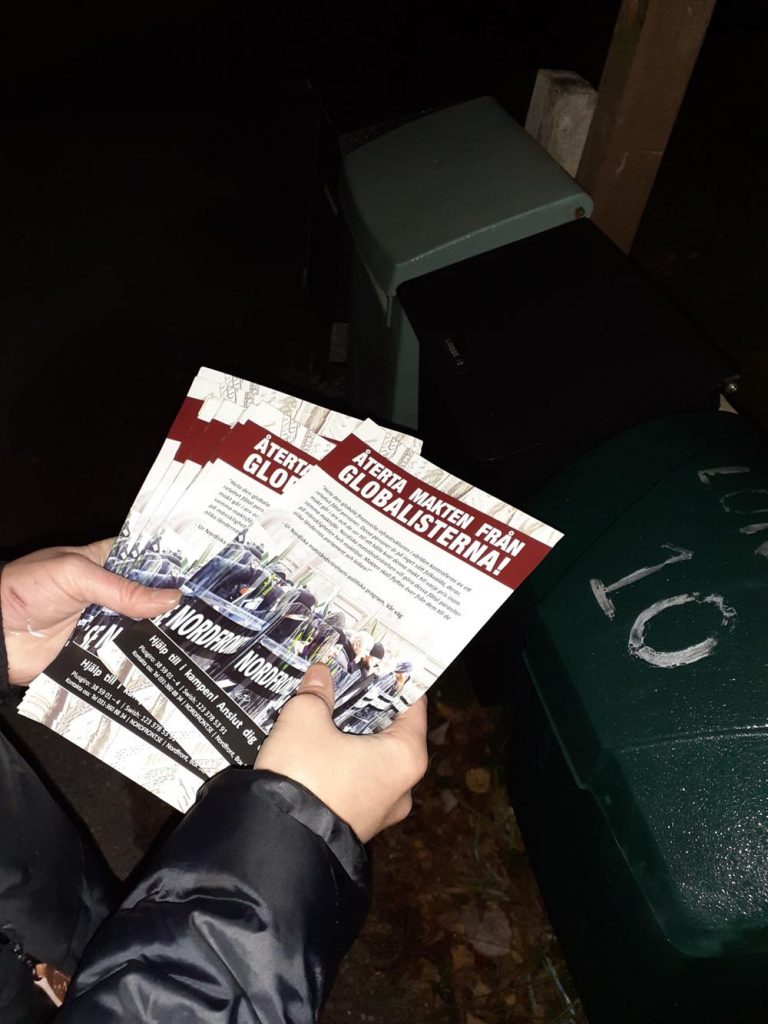 Nest 1 distributed leaflets to letterboxes and on cars, as well as placing stickers at Tunejordet in Sarpsborg.

Members from Nest 1 enlightened the public about circumcision via posters around Halden.

Propaganda was spread on the ancient trackway of Hærvejen (the Ox Road) in Vendsyssel.