On Saturday the 27th of July, comrades from activist group 204 visited Mariestad where they placed two banners on either side of a bridge near the city for maximum visibility. Many drivers waved agreeably towards the comrades holding the banners as they drove by, but there was someone who didn’t appreciate the presence of the Resistance Movement.

In a display of utter stupidity, a maniac drove his wheel loader up the bridge, towards the extreme narrow passage where the comrades were standing, in what everyone thought was an attempt to run them over. Suddenly, however, the driver stepped on the gas and dropped the excavator scoop on the ground.

The idiot driver turned around and tried to do the same trick once more, but the comrades did not back up but ran instead towards the vehicle, which caused the audacious driver to panic and drive away from the bridge in a hurry. No people were hurt or vehicles damaged during the stunt. 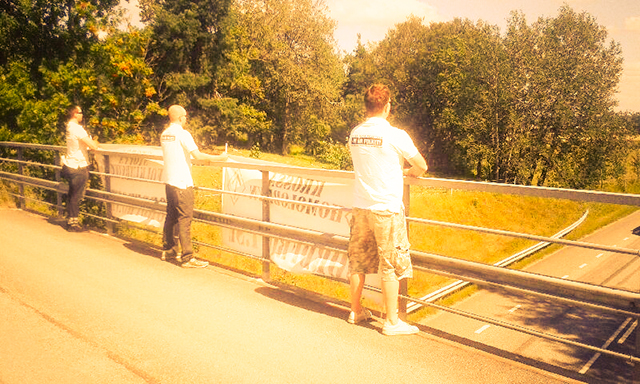 The activity continued for some hours and the day was concluded with a meal.