OPINION. The foundation “Det goda samhället” (The Good Society) has analysed publicly available crime statistics from Brå and has released its own report on criminality and ethnic background. The report shows that Brå is lying about immigrant criminality by orders from the government. 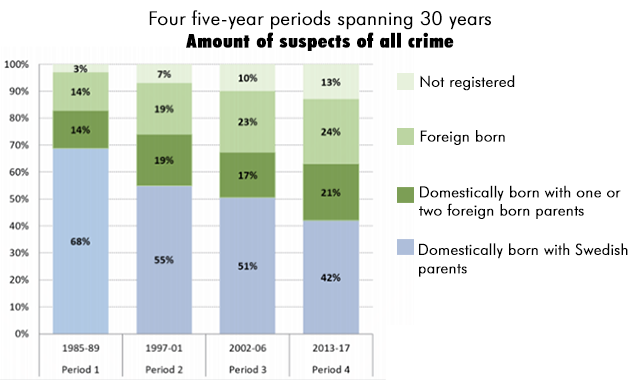 Recently Brottsförebyggande rådet (Brå – the Central Crime Statistics Bureau) released a report ordered by the government in order to prove that there is no correlation between the increased immigration of mostly young men and the spiralling rape statistics. Everything is said to be because of an increased inclination to report the crime as well as ”socio-economic factors”.

The conclusions in the report from Brå were immediately called into question as being skewed. For reasons including that the survey did not analyse the findings in depth but simply accepted a correlation between asylum seekers received by the municipality in 2015 and the change in sexual crimes between 2013-2014 and 2016-2017, a quasi method that does not prove anything.

Behind Brå’s report was a man who has been most opposed to investigating the connections between country of birth and criminality – the Jew and criminologist Jerzy Sarnecki.

The foundation Det goda samhället has gone further by requesting and analysing publicly available crime statistics from Brå between the years 1985 and 2017. The result has ended up in a report on criminality and ethnic background under the title “Immigration and Criminality – A Thirty-Year Perspective”.

Behind the report is the author Patrik Engellau, who has previously worked for the UN, SIDA and the Ministry for Foreign Affairs. This is the reason given by him for investigating the effects of immigration on crime statistics:

The reason for this report is that Brå on two occasions has given detailed investigations concerning criminality among persons born in Sweden and those born abroad… No updates of Brå’s investigations have been made for fourteen years. The primary reason is that Swedish decision makers have not wanted to know anything about the evolution of criminality among people with foreign backgrounds.

Engellau has made it clear that the unwillingness of decision makers to let facts become publicly known has been allowed to govern the work of an ”independent” agency – Brå – and dictate which results the government investigations are supposed to arrive at.

– For the first time more crimes are being committed – in absolute numbers – by people with foreign backgrounds than by people of Swedish descent.

– Swedes are no longer the most common perpetrators of crimes, as politicians, flim-flam criminologists and the media are publicly saying. During the period of 2013-2017, the number of crimes committed by people with two parents born in the country was down to 42 percent. This means that people with a foreign background, or those with foreign parents, commit 58 percent of the crimes, despite the fact that the group only makes up a third of the overall population.

– A group that has not attracted much attention previously is the group of unregistered people; for example, members of foreign robber gangs, so-called paperless people, EU migrants and tourists. This group has sharply increased their portion of the total amount of committed crimes from 3 percent to 13 percent during the last few decades.

– Concerning rape statistics, the report shows that men born in Africa are most inclined to commit rapes, followed by men born in West Asia (Iraq, Syria, Afghanistan). These particular groups have arrived in large numbers since 2014.

– Persons with a foreign background, as a group, are at about the same upper risk of committing crimes during this entire thirty-year period. This is roughly double that of people of Swedish descent when all crimes are taken into account (upper risks signify how many times more common it is for a certain group of people with a foreign background to commit a particular crime than a person of Swedish descent).

Because of the principle of public access to official records, all these statistics are available to anyone who wants to look at them. The privately financed foundation Det goda samhället has just put together these statistics without an agenda with the help of Brå and Statistiska centralbyrå (The Central Bureau of Statistics).

But to the Zionist-controlled rulers, who frenetically want to promote mass immigration and a multi-cultural society, these facts are of course uncomfortable. So uncomfortable that they in a dictatorial manner do not hesitate to dictate the results of the investigation and lie to the people, in order to later persecute those who point this out.