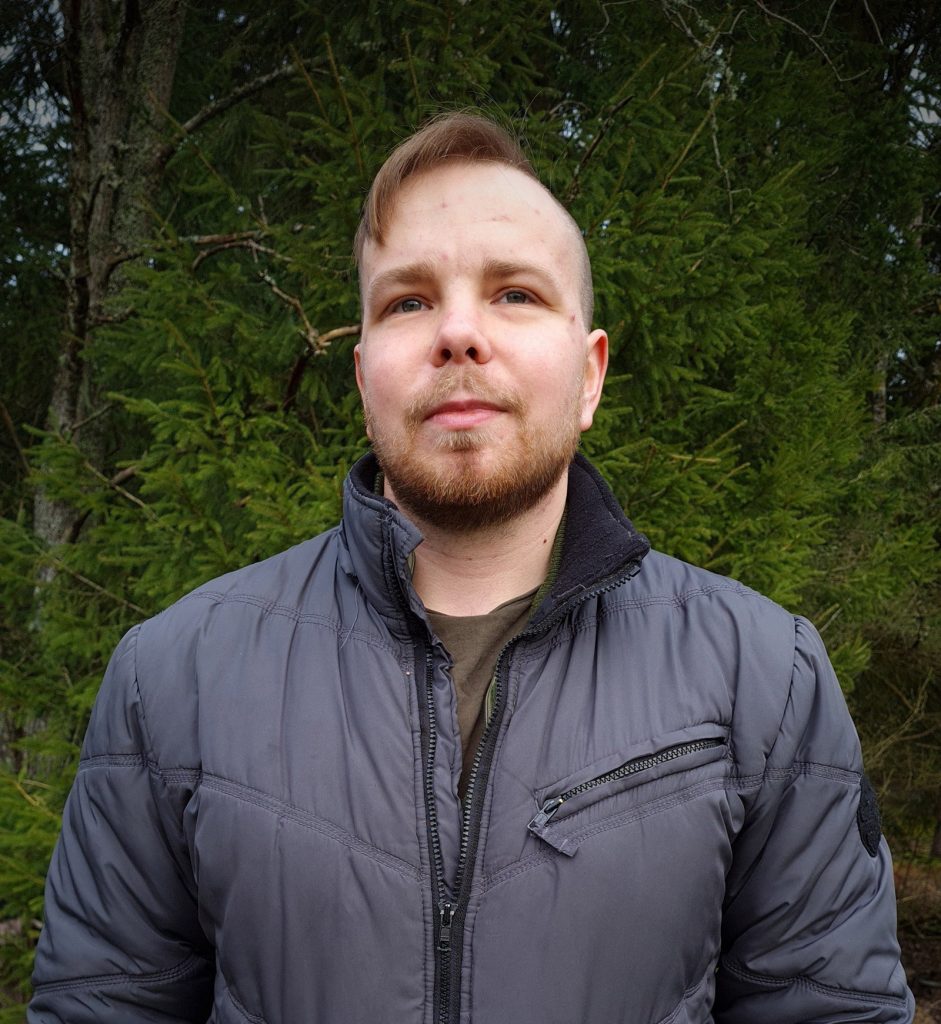 Tell us a bit about yourself, your upbringing and your current life situation.

My name is Hampus Maijala, and I’m 27 years old. I grew up in the Småland countryside, in the village of Skirö, which is often called “The Garden of Småland”, so I was always close to animals and nature during my childhood and adolescence. Today I live with my family in the hamlet of Hjältaryd.

How and when did you become a nationalist and National Socialist? Was it a long or short process?

How did you find out about the Resistance Movement’s existence?

The first time I heard about the Resistance Movement was from news reports by the lying press. Shortly afterwards I found Nordfront. So I can only thank them for showing me there were like-minded people and opportunities for organised resistance.

When did you join the Resistance Movement and what made you apply?

I became a member of the Resistance Movement on 1 May, 2017. I applied because I wanted to make a difference – to be part of creating a sound and healthy National Socialist society for our descendants.

How did people close to you react when they found out about your involvement? Did you lose any friends or family members?

The people around me were a little dismayed at first, which wasn’t that strange given that they have been fed all kinds of propaganda throughout their lives. But that changed quite quickly, and they have come to accept my commitment to the Resistance Movement. Today, no one says or expresses anything negative, and in some cases it has even caused the people in question to start reading Nordfront and the organisation’s website Motstandsrörelsen.se.

So no, I haven’t lost any friends or family members due to my involvement.

What is the best or most interesting activity/event you have been involved in related to the struggle?

The most interesting activity I have participated in would probably be Almedalen Week during the 2018 election year, which offered its fair share of interesting events and discussions, as well as the opportunity to annoy one or two self-righteous democrats with our presence. But it was also a week full of good comradeship.

Do you have any special interests?

I have a great interest in history, so I devour everything I come across in the form of books, podcasts and documentaries when I get the chance.

Do you have any hobbies outside of the struggle?

Much of my focus is on the struggle and family life, but when I find the time I like to improve my skills in a little project of mine where I’m learning smithing.

Can you reveal anything about your plans and goals for the Nest?

There are lots of plans, both in the short and long term. Without going into too much detail, I can say that a lot of focus is on building on the skills that exist within the Nest, as well as utilising some creative methods to reach out with our messages.

What kind of training do you do?

Besides the training we have within the Nest, where a large focus is on martial arts, I train callisthenics in my spare time, as it requires minimal equipment and you can train pretty much anywhere, which is perfect when you are on the go or pressed for time.

What are the best books you’ve read in your life?

George Orwell’s 1984, the Lord of the Rings trilogy, and, although it’s a bit of a cliché, Mein Kampf.

Which characteristics are important for a Nest Chief?

Some of the traits I consider the most important in a Chief would be the following: integrity, empathy and courage – i.e., to be able and unafraid to act in various situations, to be able to communicate, delegate and show gratitude for work performed.

Why should someone join the Nordic Resistance Movement?

If you have your heart in the right place and are willing to contribute to the struggle, you should join the Nordic Resistance Movement as it opens up completely different opportunities for people. Instead of fighting against the system on your own, you do it together with your comrades, so you don’t have to carry the entire burden on your shoulders. Everyone has heard the saying that one stick is easy to break, but that a bundle is strong.

So to those who are thinking of joining the Nordic Resistance Movement, do not hesitate. Go for it!