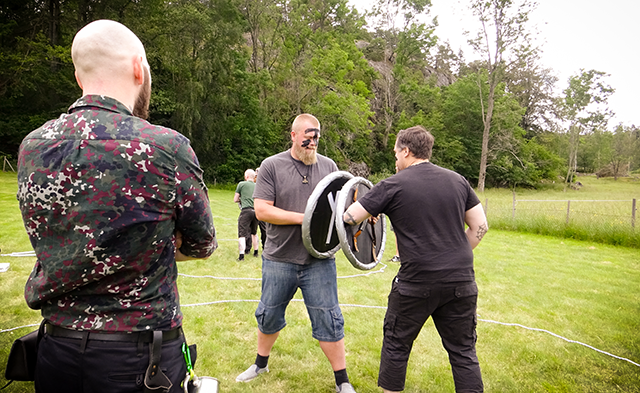 Early on 21 June members and activists from Trestad met in a location near Uddevalla and began to prepare for the Midsummer celebrations. Flags were hung up, the furniture was arranged, and a herring lunch was made.

The rest of the guests arrived at 2 p.m., with both new and old comrades being bid welcome by the host for the day, group chief Fredrik Högberg. Soon after, everyone took their places at the table and enjoyed all kinds of herring, served with new potatoes.

After dinner and discussion of the most pressing matters at hand, it was time for the Viking games. The man in charge of the competition, Tommy Hvit, instructed everyone of the rules and announced the first event of the day was to be war painting. The participants used charcoal to paint their faces and channel their inner warriors, before standing in a ring to observe everyone’s efforts. The one with the best war paint was awarded a point.

A duel between radio boss Fredrik Vejdeland and radio announcer Daniel Nordberg had been promised earlier this year, and at the request of the organiser, this duel finally took place in the form of a battle in all disciplines of the Viking games. The match-up was hard-fought and even, but we will let one of the guys say who won at a time of their choosing!

Afterwards the games between the rest of the beserkers and ulfhednar took place. They were as follows:

At the end of the games, the points were tallied and the two men with the best results met in a tie-breaker. Each was blindfolded in turn and had to hit his opponent with a punchbag. Between the blows, the man who wasn’t attacking could shout insults at the attacker, which drew many laughs from the crowd. 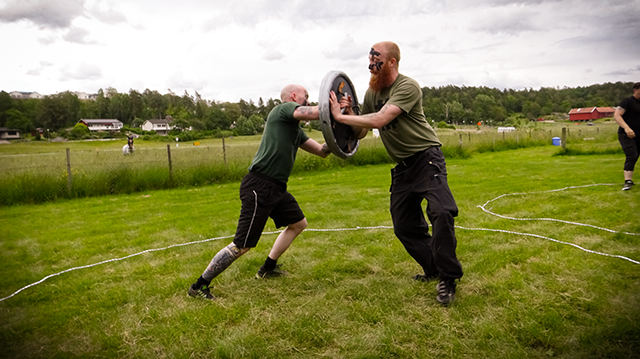 The tournament was eventually won by Nest Chief Jimmy Andersson. His prize was a gift voucher worth 800 kronor from Midgård, who generously sponsored the event. Congratulations!

Dinner was served shortly afterwards. It consisted of grilled beef with potatoes and sauce. The guests appreciated the food and ate well, hungry after all the exertion. Afterwards, the festivities and good comradeship continued into the evening until it was time for bed.