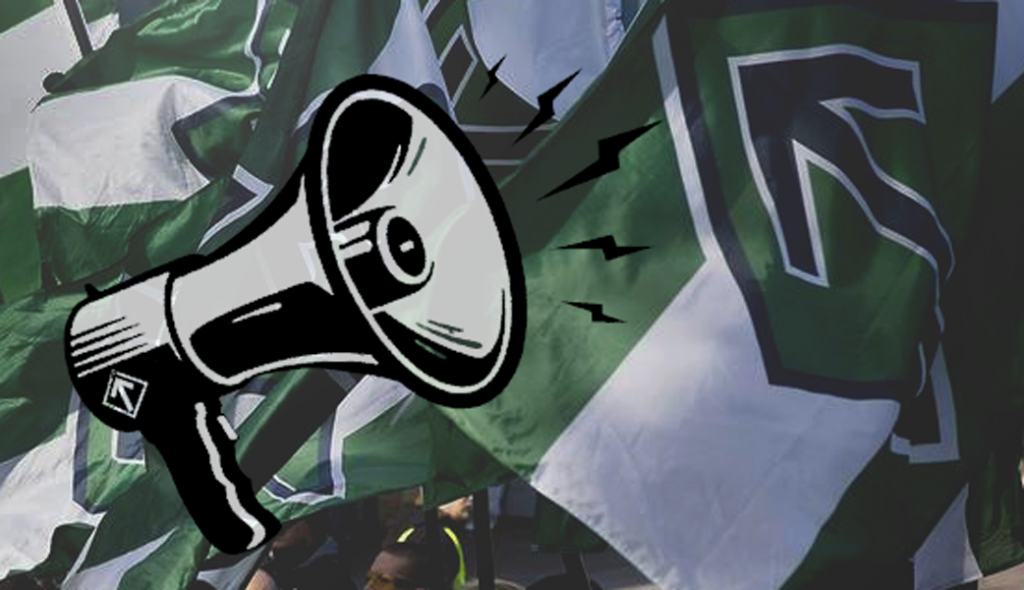 As a leading member of an organisation that seeks radical change in society, wants to liberate the people and elevate them to new heights, yet also threatens the existence of the power elite, it came as no surprise to me when the police knocked on my door back in November 2019, as the police force takes every opportunity to gather information on the Nordic Resistance Movement. What did surprise me was that I was arrested and remanded in custody before being brought before a judge the next day, blamed for vandalism of a Jewish cemetery in Randers.

Remanding accused persons in custody is a way to ensure they cannot interfere in the police’s investigation. However, as the police had already ransacked my home and confiscated various items they hoped would connect me to the Jewish cemetery and a bank in Randers (which they didn’t find) while I still remained detained for weeks in Randers Jail, it began to dawn on me that the police’s efforts were probably more about investigating the Resistance Movement rather than solving two cases of vandalism. As a leading member of the organisation, I was the police’s gateway into a whole movement under the pretext of a vandalism investigation.

I had to accept this and deal with it while I waited for the four weeks of custody to end. But the custody didn’t end. Instead it was extended again and again until almost four months had passed. During this time, the investigation rolled on, and more accusations were brought against me, yet no more evidence emerged against me concerning the original two cases of vandalism.

I chose to remain silent throughout all of the proceedings. Right from the beginning, when I was arrested, I told the police in the car on the way to the station that they could cancel their planned interrogation and contact my lawyer.

All members of the Resistance Movement (and no doubt many others) know that a police interrogation, or even just a conversation with the police, is designed to make you incriminate yourself. Nothing you say, and none of your explanations, can be expected to benefit you. Conversely, everything you say will be used against you. Remaining silent is usually the best tactic if you’re charged with something, especially if the police can’t find evidence connecting you to what you’re accused of, as the burden of proof always lies with the police and prosecution.

In my case, I was sure the police’s investigation would not find anything that connected me to their inquiry, but I also didn’t have a demonstrable alibi, so for the sake of the organisation’s security, I chose not to cooperate in any way, either with the police or during the trial.

Throughout proceedings, the media wrote incorrect and mendacious articles about both the organisation and me; in addition, my photograph was published, and people in my social circle were contacted and questioned.

This negligent journalism practically convicted me in advance in the media, particularly the stories about shoes and jackets with green paint on being found at my home. It later emerged that the green stains on my outdoor clothing were actually from algae from the forest, but the media didn’t see fit to publish that detail.

This massive media interest and public shaming of an unconvicted person did not surprise me, however, as the media is the hidden system’s responsible department for manipulation and misleading the people. Instead, the enemy media’s behaviour, in which they directed their hatred of the movement against one individual and fed the people with lies to reinforce a false narrative, reinforced my perception of them as the lying press and confirmed to me that the Resistance Movement and the National Socialist struggle are on the right path. I knew the press was extremely unprofessional, mendacious and one-sided, but I was less aware that the judicial system would ultimately prove to be just as one-sided and amateurish.

I don’t know if the judge was influenced by an order sent directly from the Ministry of Justice, or if he was simply influenced by the unanimous screaming of the lying press, but he decided to convict me on the basis of a selective weighing of evidence and information that benefited the prosecution’s narrative, while turning a blind eye to all the circumstances that cleared me of any charge. I don’t know if it can be called unprofessional, or if the judge merely displayed a professionalism or loyalty to the minority rulers of the hidden system.

I have now been convicted by the enemy’s judge in the enemy’s courtroom for offences I have supposedly committed according to the enemy’s prosecution. The enemy’s police authorities and investigators could not produce any concrete evidence against me, so I was convicted even though my case was not proven to be “beyond reasonable doubt”, which is an alleged principle of law in this alleged state of law – “alleged” being the key word.

I am naturally not happy with the verdict, but when operating in a hostile environment, of which I was fully aware, I accept the verdict as an unavoidable condition – a condition of a struggle for freedom so important that one year behind bars will only act as an interval in my revolutionary commitment. It will be an interval that gives me time to immerse myself in books, time to train and, not least, time to make new plans for the acceleration of the necessary coming revolution.

Choosing not to appeal

I have chosen not to appeal the verdict. There are several reasons for this decision. I did not appeal because my defence counsel did not think anything would come of it, even though he said the sentencing was very severe and that the entire handling of the affair had followed case law to a minimal degree. He did not believe that the prosecutor’s request for one and a half years imprisonment was one he had pulled out of thin air, but rather that this case had been high on the agenda for both the district attorney and public prosecutor, and that the request and the desire for a harsh punishment came from “far up in the hierarchy”.

Since I have no naive misconception about the High Court being fairer, less loyal to the system, following existing case law more closely, or being less influenced by Jewish power and the lies of the press, I chose not to appeal the verdict. I did want to appeal the whole question of guilt, as I find it difficult to accept that such a long prison sentence can be imposed on the basis of circumstantial evidence, but my desire to seek fairer treatment of my case had to be weighed against the risk of potentially receiving a stricter sentence from the High Court, which I would have been forced to pay for myself.

Another more pressing reason I chose not to appeal was that it would drag things out and therefore take longer before the organisation could announce its verdict on me. As I wanted to get back into the struggle as soon as possible, I chose to have the case concluded immediately.

There were no fingerprints at any of the crime scenes, no traces of DNA, no shoeprints, no surveillance images and no eyewitnesses. There were only two encrypted text conversations, which did not include anything pertinent except the words “paint in a balloon” and the sentence “Shall we wait a few hours and then do it?” The court did not care to address the wealth of possibilities these words could have referred to, but instead chose to focus on the Jewish cemetery. The fact that there was no concrete evidence against me did not stop the system’s hunt for a conviction.

I would use the paint-filled balloon for an action against a bank in Randers, which I explained to the Nordic Council. Balloon remains were found at the bank, but none were found at the Jewish cemetery. Furthermore, the police investigation of the paint produced nothing more than the claim that “it could have been the same paint that was used at the bank”. Yet I was convicted of vandalism against the Jewish cemetery on the basis of two text conversations that at no point mentioned anything about the cemetery.

It’s clear that this whole case against me was a manoeuvre by the police authority to gain an overview of the Nordic Resistance Movement by getting me out of the way so they could rifle through my possessions. Such a police action is not free, and I am now paying the price. It was necessary for me to be convicted so the police authority could defend my four-month detention while they collected information about the Movement.

I have not been convicted of anything I have done, because nothing proves I took part in the vandalism of the Jewish cemetery. I have been convicted because I and the Resistance Movement stand for views that run contrary to those of the system.

Acquitted by the organisation

I now look forward to returning to the struggle for a free and united Nordic Nation. This abuse of power by the police and this farce of a lawsuit, with its accompanying media circus, have only strengthened my convictions. I am, if possible, even more convinced today that the people are living under a concealed dictatorship, which this time showed itself and all of its faces, and that the struggle for the freedom of the people is a struggle to be waged against all this creature’s tentacles simultaneously.

In a country where politics is dictated by the media, where the media overflows with lies and is dictated by Cultural Marxism and Jewish power, where the police force obey orders from anti-White forces, and where every struggle for freedom is combated with unjust imprisonment, good arguments can only win the people’s struggle as long as the sword is willing to speak just as clearly.

Neither I nor the Nordic Resistance Movement will be cowed by the system’s oppression and use of force to attempt to intimidate us into silence. The struggle against the anti-White oppressive system continues unabated until the day it is crushed and lies in ruins and a new order can be established.

You can never stop us!