WILDERNESS ACTIVITY. Comrades from Sweden’s Nest 4 went camp-building in the winter forests of Sundsvall this month.

On Saturday, 6 March, comrades from all corners of Nest 4 met at a remote location in the forest outside Sundsvall to undertake a healthy outdoor activity: camping in a shelter they had to build themselves.

The hike proved to be difficult due to the deep snow, and as the main attraction of the excursion was the camp-building itself, a joint decision was made to cut the hike a little shorter than originally planned. This meant that everyone was able to save their strength and begin the building work immediately upon reaching the campsite.

An area large enough for a campfire and shelter was dug out and flattened, poles were tied together to form a frame for the tarpaulin, and a bed of spruce twigs was laid underneath. 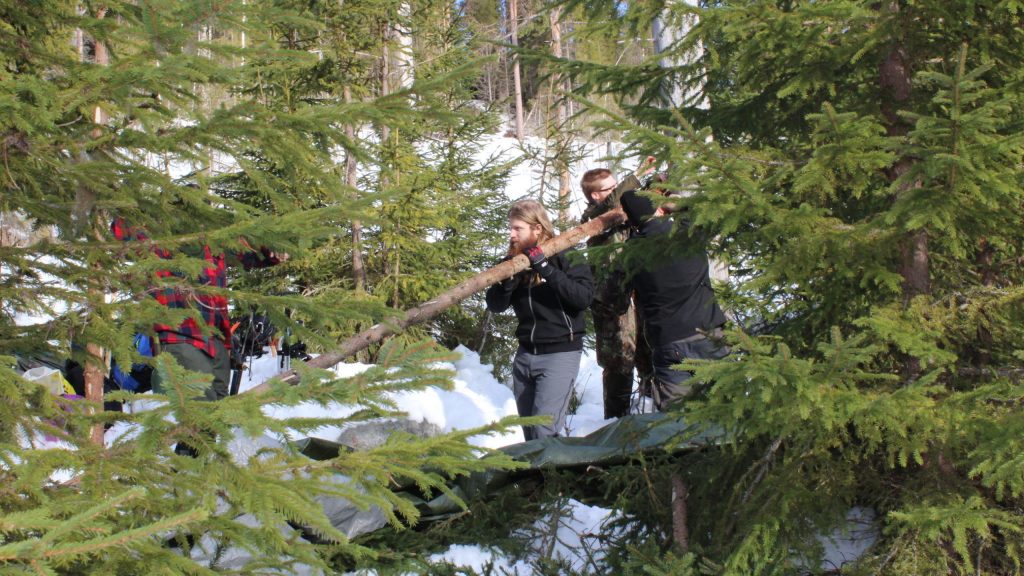 For the trip, the group had brought specially imported MREs, or Meals Ready to Eat, from Lithuania. This military food can be heated without fire and contains a number of survival necessities.

After everyone had eaten, the fire had been lit and the shelter completed, all focus turned to collecting wood before nightfall.

Once everything was ready, the group went to bed fairly early so they could periodically get up during the night and keep the fire alight. One comrade built a Swedish lantern, which shone very cosily over the camp. As soon as the day dawned again, everyone got up, packed their things and headed back to the cars. To celebrate a successful journey, the comrades ate lunch together before going their separate ways.

Sometimes it’s important to test yourself in order to know what you’re made of and to feel alive. If you live in the Nordic countries, take the first step towards a new trial and a new chapter in life by applying for membership today!