ACTIVISM. The Resistance Movement recently held a blitz demonstration in the heart of Aarhus, Denmark, with speeches and a leaflet distribution. 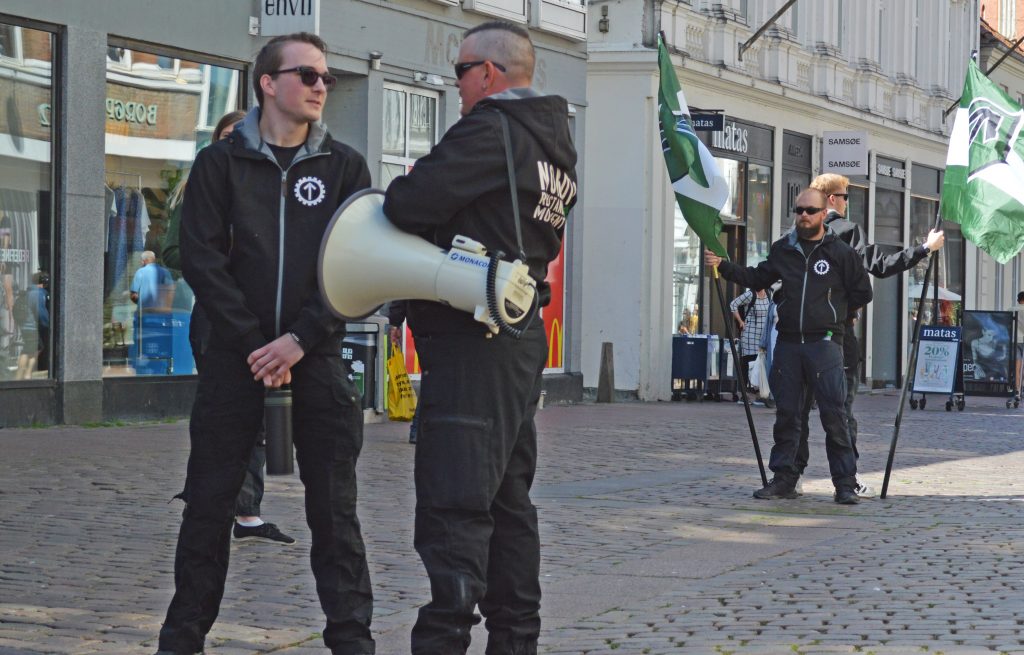 The Resistance Movement conducted a blitz demonstration with speeches in several locations in central Aarhus earlier this month. The speeches were held on Store Torv, Bispetorvet and Badstuegade, where the people walking the busy streets could hear the uncomfortable truths about the degradation of Aarhus from a proud White city to a breeding ground for Arab and African gangs, as well as the LGBT infection, which is growing in Aarhus and every other large Western city. 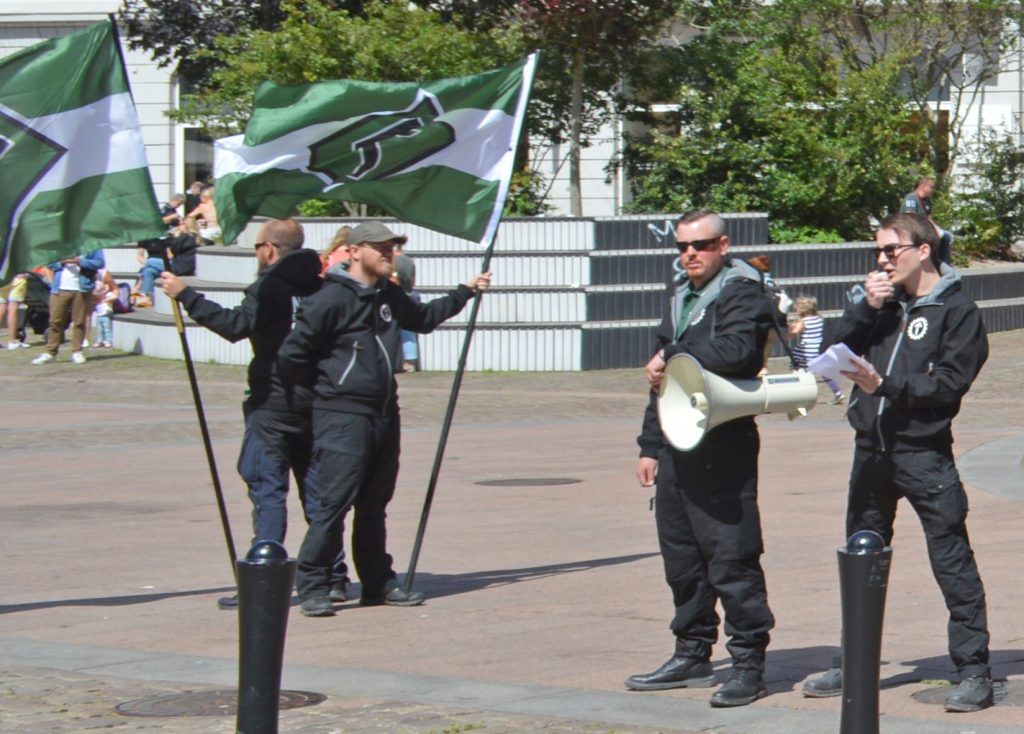 While the speeches were being held, the activists handed out leaflets to passers-by, several of whom had friendly conversations about mass immigration and the Resistance Movement’s vision of uniting the Nordic countries into one National Socialist state. 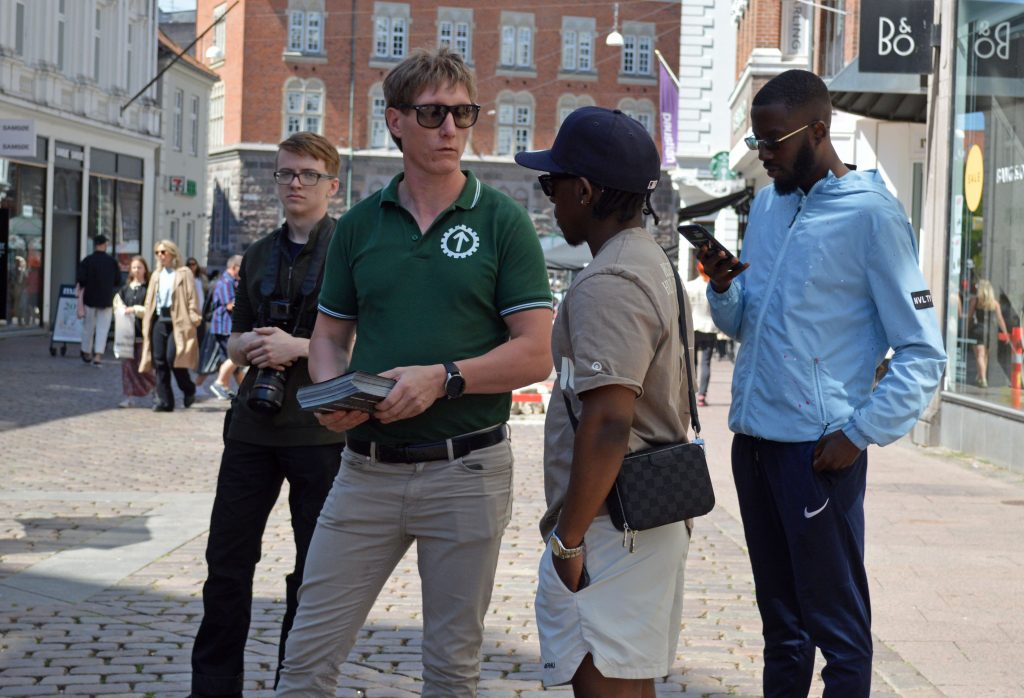 The whole demonstration, which lasted almost two hours, passed without problems. The police briefly visited the action but did not attempt to stop it, and no racial foreigners or Antifa interfered. 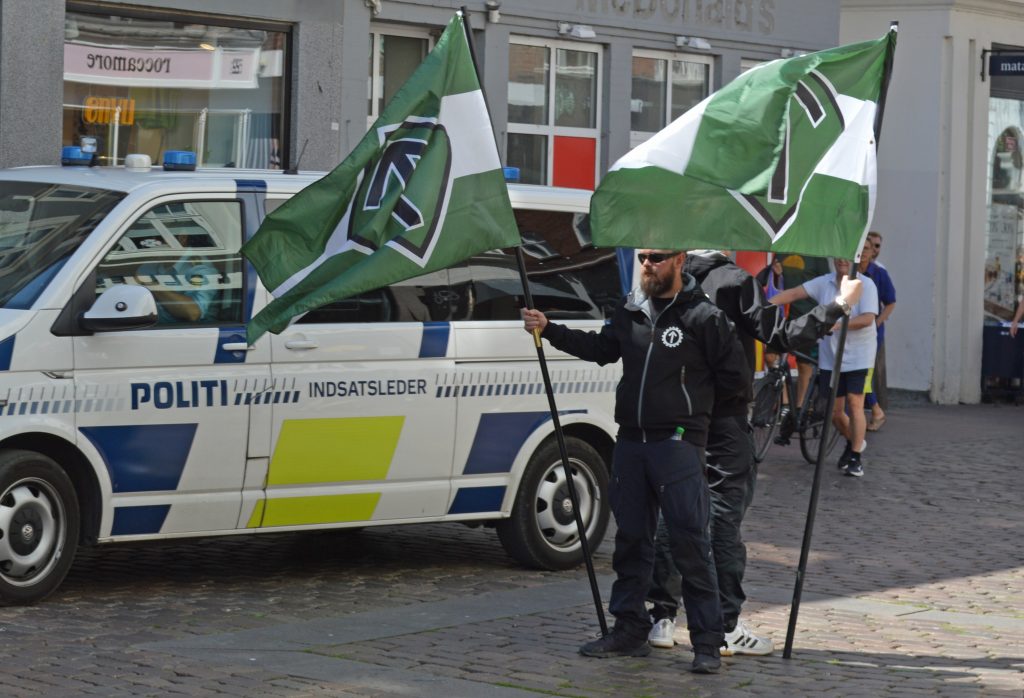 Aarhus has existed as a town since the 900s, under the name Aros. Aros means “river outlet”, but our ancestors never thought that in the year 2022 this would come to refer to globalism’s sewer pipes.

The waters in the Viking Age were clean and life-giving, and Aarhus was named after the river outlet as a tribute to the purity and vitality of nature. But the sewage has been rising in Aarhus in recent years – from places like Gellerup and Brabrand, as is the case in all Nordic cities.

The founders of Aros never anticipated or wanted this magnificent city to be overrun by humanity’s most decaying, decadent and rotten.

Just a couple of months ago, a homosexual pride celebration was held in this city of the Vikings, while the proportion of racial foreigners in the city grows and grows.

Ask yourselves if the founders of Aarhus and our ancestors lived and died so the perverse could conquer the city and normalise their shameful sexuality, while Middle Eastern jackals could slowly but surely conquer the suburbs.

How long has it been since you heard about racial foreigners from Brabrand selling drugs to our children?

How long has it been since you heard about crazed racially foreign drivers disabling police officers?

How long has it been since you experienced the homo lobby’s normalisation of LGBT?

How long has it been since Denmark lost a prosperous industry when the democratic dictatorship slaughtered the mink business?

How long has it been since the democratic dictatorship sold off Danish heritage when they sold the vaccine factory?

How long has it been since we heard about dead Danish soldiers in unholy wars for NATO and the USA?

Have you gotten used to interest slavery?

Have you gotten used to 13 parliamentary parties that get nothing done because they constantly acquiesce to one another?

Have you gotten used to your history and identity having to make way for the offended?

Have you gotten used to socialising with Africans and Arabs – and are you OK with your sons and daughters doing the same? Or the fact that the statistics clearly show that White boys are beaten and robbed, and White daughters are threatened and raped by the people in Brabrand and Gellerup.

All these things are connected. And the political system that tries to harvest your votes every four years is the problem.

No one voted for sky-high interest rates.

No one voted for the shaming of White identity.

No one voted to import hundreds of thousands of racial aliens to our countries.

No one voted to sacrifice Danish soldiers in illegal wars for globalism.

Just as no one voted to shut down the mink industry, the sale of the vaccine factory or the state-sanctioned normalisation of LGBT.

The Nordic Resistance Movement says: The system that shapes society and educates the people is defective!