NATURE. Nest 5’s activist group spent almost 24 hours in the woods of Dalarna on Saturday 23rd May. Here’s their report on how the activity progressed and the challenges they faced.

On Friday at 10 p.m. the organizers sent the participants a text message to tell them that the activity was going to start four hours earlier. They were originally going to meet at 11 a.m., but this was brought forward to 7 a.m. Almost all the participants got the message, but one of them forgot to reset his alarm clock because of the short notice.

After many unanswered phone calls on Saturday morning, one of the organizers visited the home of the participant who didn’t reset his alarm and banged loudly on his door. The newly awakened and somewhat irritated Resistance man then had to start packing and get ready to go to the gathering place on his own while the others went ahead of him. 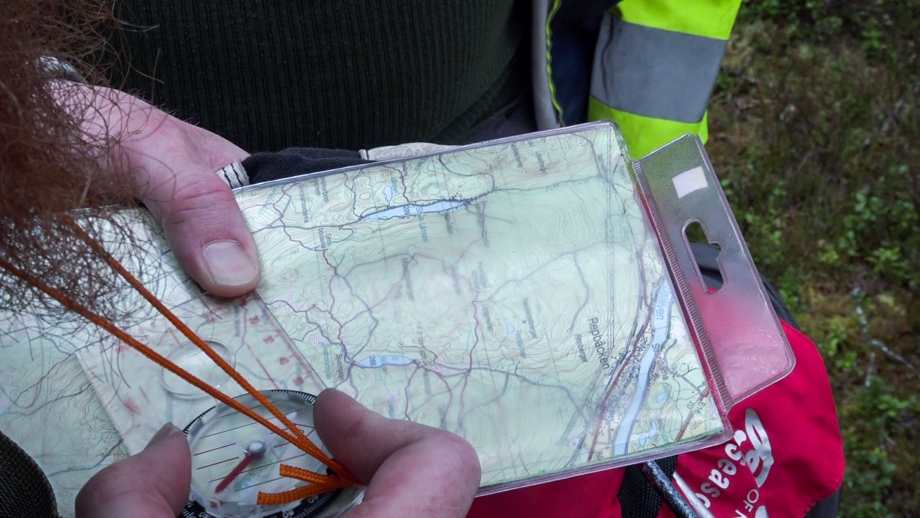 The activity started at 07.00. Since one participant was missing, the group was assigned the task of lighting a fire in the vicinity of the gathering place. However, they were only allowed to light it with a match and the accompanying matchbox as a tinder box. It had also started to rain slightly, something that would go on for the rest of the day.

The group succeeded in their task and were awarded their next assignment, which was to push a car up one of the roads leading to the adjacent mountain. After reaching a turning point for the car, they reversed its direction and started jogging alongside it down the mountain.

After working up a sweat on the mountainside, the men were further informed that only one backpack would be allowed to be used jointly by the group. The participants were forced to agree on the essential things to bring along, such as water, food, tools and sleeping bags. They were allowed to bring extra equipment, but it had to be carried outside of the backpack. 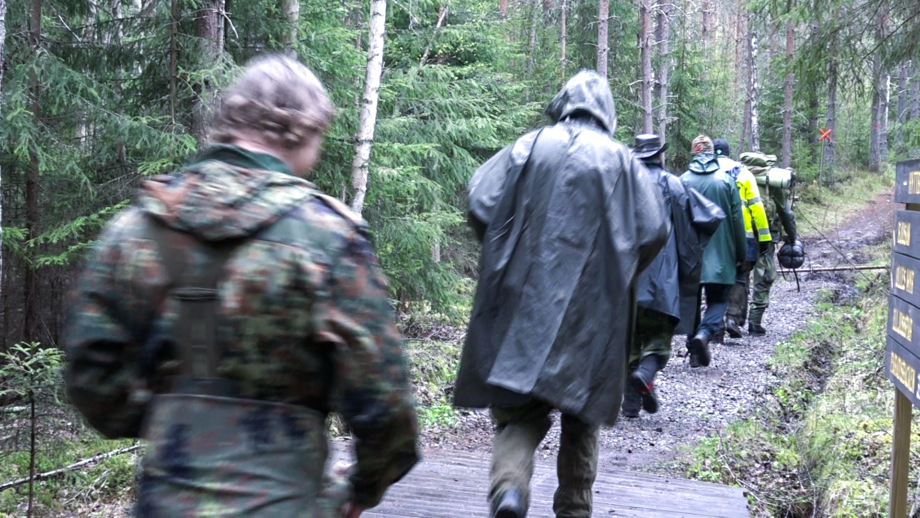 After an hour the late participant arrived. He was noticeably annoyed, but still ready for the challenge. He stepped forth from his vehicle to the group, and as every real man in Dalarna does in the early morning to get himself started, he baked some snus.

Then it was time for the organizers to inform everyone of the rules. This was going to be a drug-free weekend, and thus it was pointless to bring along some instant coffee, which one participant was planning to put in the backpack.

With a heavy sigh, the late comrade put his can of snus back in his car, with some readily baked for his return. In addition, water was not to be consumed by the group during the day before reaching their destination. 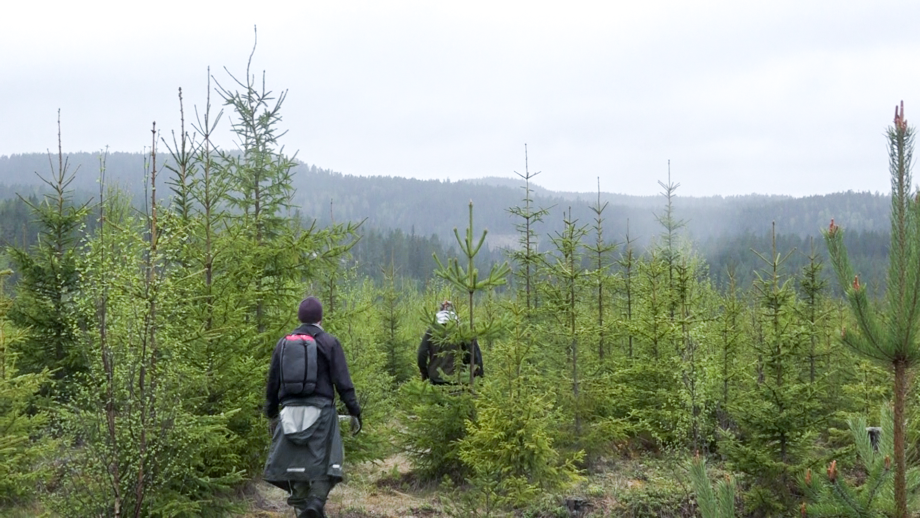 Just before 9 a.m. the comrades started their hike through the woods. It was now time for them to leave their set path and navigate through the forests and fields. The participant carrying the only (and very heavy) backpack was also responsible for navigation.

A few hours into the hike, the subject of drinks was brought up, but the group still kept up their spirits and their warmth despite the persistent light rainfall showing no signs of disappearing.

After five hours of hiking, the group was noticeably exhausted, but about two hours still remained before they were due to reach their destination. During the hike they stayed away from roads and trails in order to make things more difficult. If anyone chose to use a trail or a road, it had to be done while jogging, which the group did on a number of occasions. 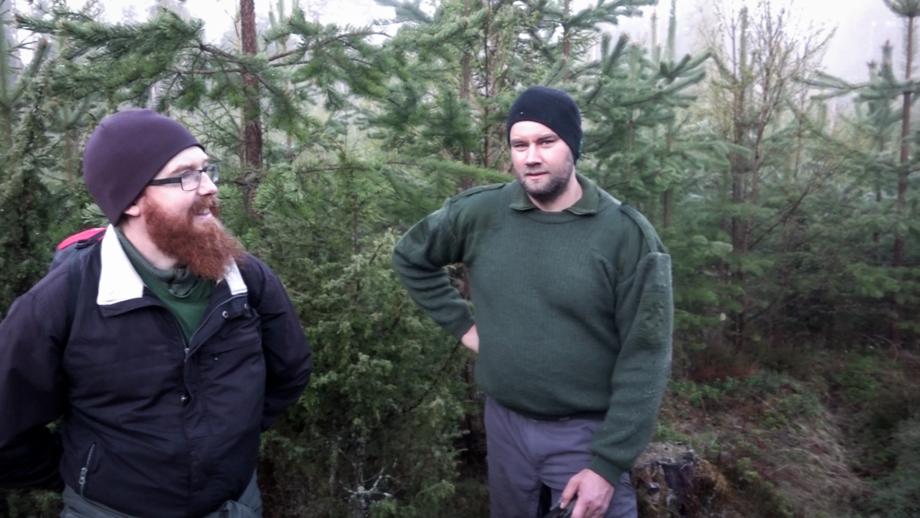 The men reached their destination at around 3 p.m., but each was forced start a separate fire with only one match in the accompanying box before they were allowed to drink their water. As if this weren’t enough, the organizer had been cheap and brought matches of poor quality. If the men failed to start a fire with their one match, they could only be given more matches after 50 push-ups.

After varying success and about 200 combined push-ups, all of the participants managed to start their fire and were allowed to drink water during a short break before the hike continued. Starting the hike again was welcome for a while, as the group had become cold in the time it took to light a fire. 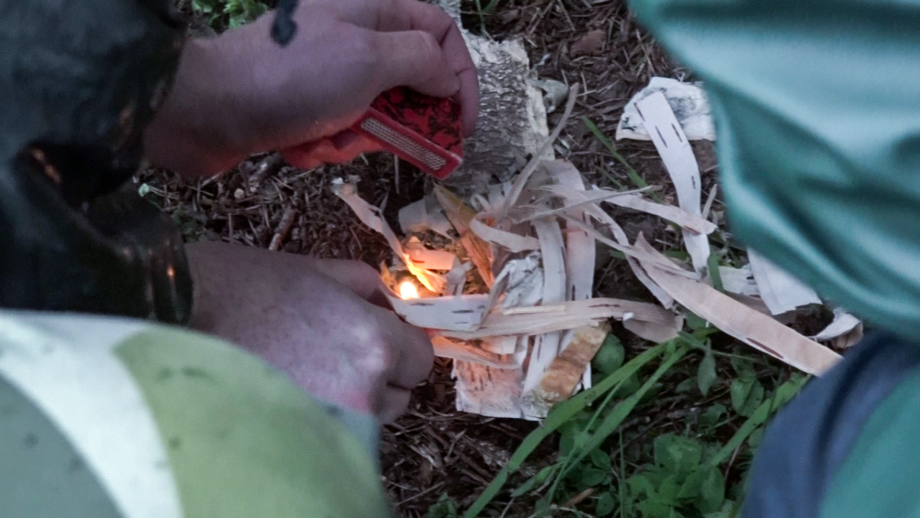 After a short walk from the previous location, the group got to pick a spot to set up camp for the night. The rain subsided and turned into a slight drizzle. As only two participants had brought along sleeping bags, they had to build an extensive camp.

One of the participants opted to build a small hut of his own, while the others worked together to create a large bivouac with a reflector wall and plenty of spruce sticks as bedding.

Two hours later the camp had started to take shape, but after a very long day filled with tough challenges, the entire group was tired. The only thing left was to gather firewood for the night, which was particularly important for those lacking both bedding and sleeping bags.

Darkness descended on the woods at around 22.00. The group were satisfied with the amount of firewood they’d collected, and they started eating their food. After the meal, everyone laid down to get some sleep. 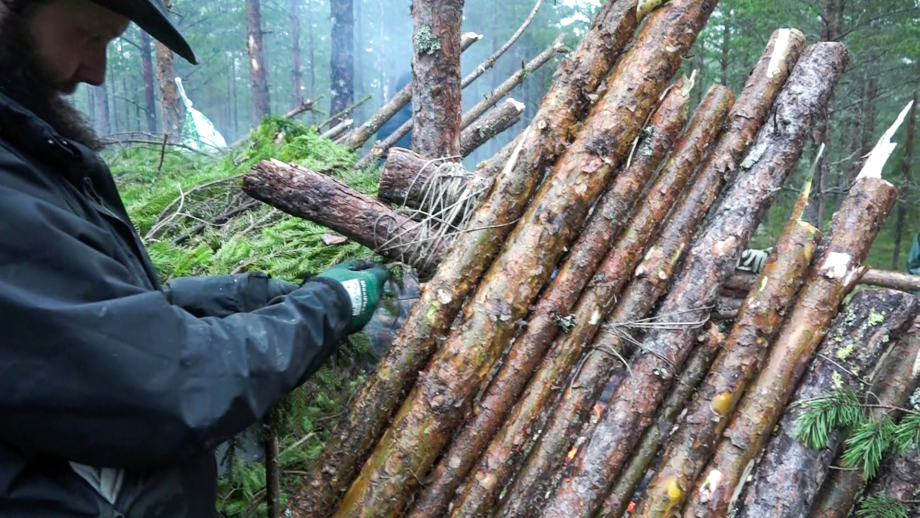 After three hours of sleep, the comrades were woken by the organizers, who told them it was time to get up and that there were 30 minutes left until departure. The time was 2 a.m. The group slowly started getting dressed, put out the fire and cleaned up the camp.

An hour after getting up they continued their hike. This time the group was treated a lot more mildly, and ordinary dirt roads as well as trails were allowed to be used on their way back to the gathering place whence they started about 20 hours earlier.

The group got to see an incredibly beautiful morning sun between Dalarna’s mountains, where a thin layer of mist remained from the rainfall of yesterday. If the cameraman had been more alert, it would have been captured on film. But perhaps some things are just for the participants to enjoy.

The activity was designed to be mentally challenging and to test the participants’ attitude towards bad situations such as lack of water, rough terrain, no food during the day and decamping in the middle of the night. Cold and unpleasant weather was an advantage for the activity rather than a disadvantage.

The organizers were happy with both the performance of the participants and their attitude. Similar activities will no doubt be arranged in the future. 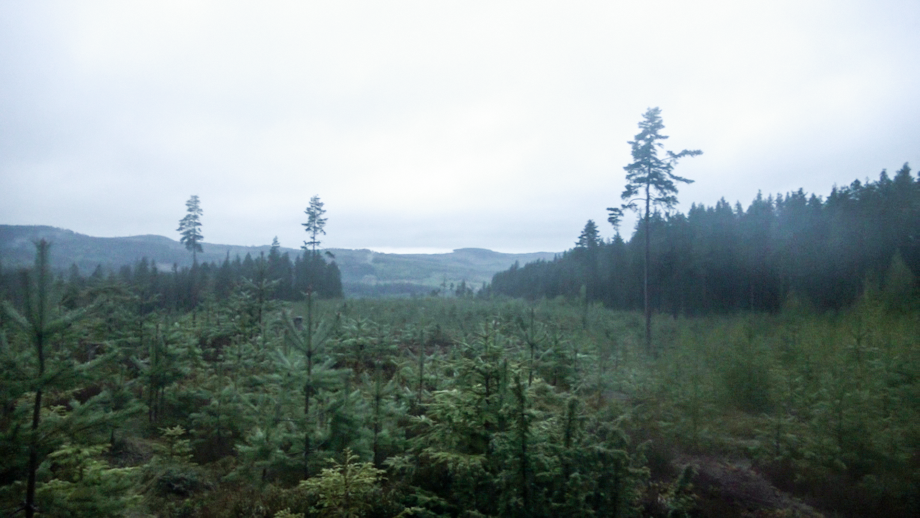