ACTIVISM. Danish Nordic Resistance Movement activists visited a school in the city of Randers last month for a public activity as part of their National Socialist school campaign. 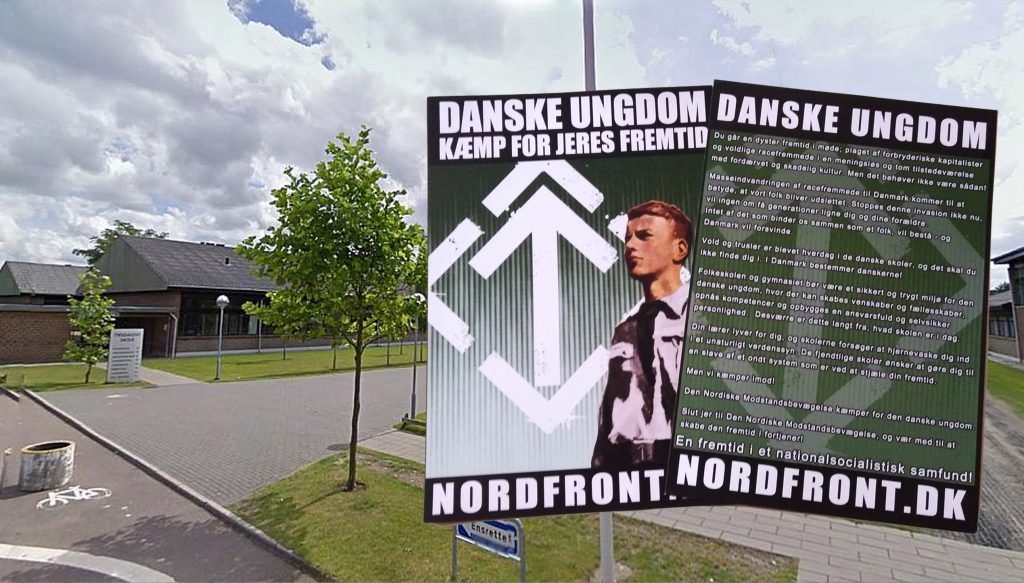 On 25 October activists visited Tirsdalens School in Randers during lunch break hours and held a speech outside with a banner reading, “Danish Youth – Fight for Your Future”.

Many of the pupils wanted to come out and take leaflets, but their panicked teachers stopped them from exiting the building. The teachers pulled down all the blinds in the classrooms to prevent the pupils from seeing the activists’ banner and threw themselves against the doors and bolted them shut.

Meanwhile a woman’s voice thundered out of the school’s speaker system, forbidding the pupils from going outside during their break and telling them to stay inside instead.

Despite these measures, the activists succeeded in distributing hundreds of leaflets to youngsters reaching out of the windows.

The teachers called the police, who arrived in no less than three vans. They registered all of the activists and ordered them to leave the premises. They also confiscated and deleted the video material, but the activists later managed to restore some of the footage. Parts of the speech can be seen in the video below:

The day was concluded with an interview requested by a group of students from Viborg Media School, who had filmed the demonstration at the school. The students’ film was also confiscated by the police, but this didn’t stop them interviewing two of the day’s activists: Jacob Vullum and Asbjørn Nielsen. The interviewers got a first-hand insight into life as an activist, personal reasons for joining the struggle, the ideal North, and something to do with six million Jews… 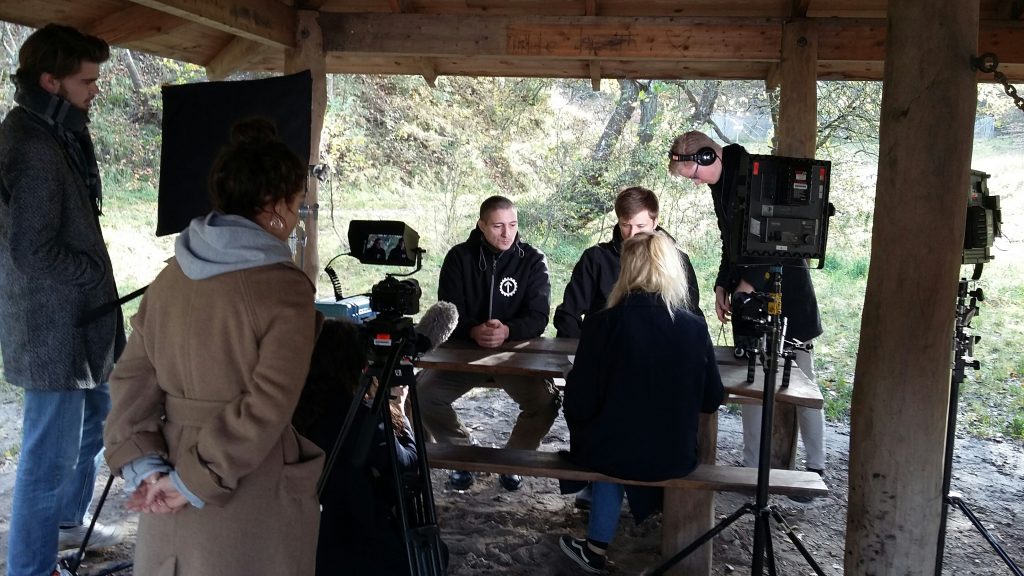 Read the full speech below.

Danish youth – fight for your future!

Fight against a future as slaves of a traitorous system, in which you are ruled by a wealthy elite which decides how your lives and existence are determined.

We live in an illusion – in a lie.

In reality democracy is an oligarchy, in which powerful, criminal bankers, military men, media moguls and businessmen do deals for your lives, so they can earn money from your distress.

Democracy is a lie. A plutocracy that disguises itself as democracy to hide the fact that rule by the people in Denmark is non-existent. Under the plutocrats’ power, we are all slaves who accept their lies as truth.

The media lies. The media you grow up with – which broadcasts the news, which shapes emotions that create new laws – lies and keeps the enemy hidden from you.

Your education is a lie. The Ministry of Education and your school lie to you.

Schools have been increasingly transformed into Cultural Marxist indoctrination centres, where Denmark’s children and youth are filled with useless, erroneous knowledge, while they are cut off from important information, and slowly but surely are shaped into cultural slaves without a past or history, with an overtolerance for foreign powers that attempt to destroy them, their parents, their culture, their identity and history.

False history lessons. Mendacious social studies. And the eternal politically correct doctrine that everyone is equal and has equal value.

Everyone is not equal. Everyone does not have the same value.

There are big differences between white and black people. A European and an Arab are not the same.

When we are forced into a mentality of “equality for all”, it means you are being dumbed down. White children and youth are being downgraded to implement the equality the politically correct mentality demands.

The Cultural Marxist system and the corrupt society deceive you by saying there are no different races.

Danish youth – wake up and break out of the globalists’ hypnosis. We are white Europeans, white Northmen. We are not blacks, Asians or Arabs.

We are white. Our forefathers created the beautiful white European culture, a culture that is being destroyed by the non-white invasion.

Danish youth – you must rise up and oppose mass immigration. You must build strong communities with your white brothers and sisters. You must develop a racial consciousness. You must fight for your own. You must disassociate from the invaders.

You must gain knowledge of the corrupt system you live in. You must realise the enemy has spread their poison throughout politics, education, media and popular culture.

I will not let myself be reduced to a cultureless consumer.

And I refuse to let my country be occupied by foreign powers and see my people be eradicated.

Our people are being wiped out.

Danish youth, if you don’t act, you will grow up as a minority in your own country.

The racial foreigners are taking over our city centres. Your mothers and sisters are being raped and violated. Your fathers and brothers are being assaulted and derided. It is you who must put a stop to it.

Danish youth – fight for your future!