Home Resistance News “I realised the seriousness of the ongoing genocide of White people and... 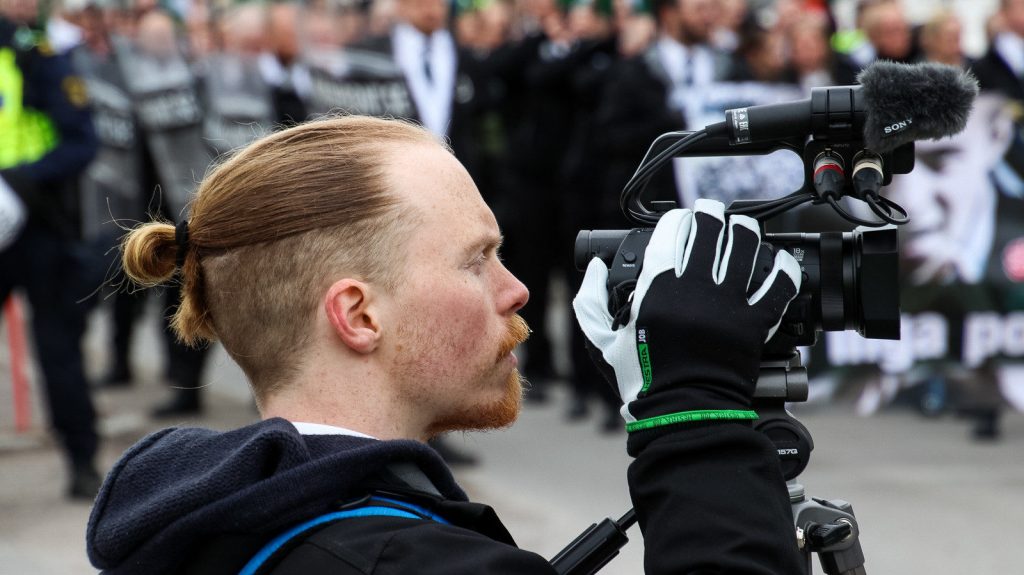 Hi, Andreas! Would you like to start by telling us a bit about yourself, for those who don’t know you?

I can indeed. My name is Andreas Holmvall, I am 36 years old, married and I have three children. I’m an inveterate Norrbotten man who loves the forest and nature. A bit of a computer nerd, interested in media and design.

Regarding your engagement in the movement, could you tell us a bit about your areas of responsibility and roles within the organisation?

First and foremost, I’m an activist, which means I maintain a very high level of activity. Most of the work I’m involved with consists of various media projects, but I also try to attend as many public activities as possible. In addition to that role, I also run a podcast called Nordic Frontier, an English-language programme for the movement. I’m part of the leadership of Sweden’s Nest 6, and I was recently put in charge of the Resistance Movement’s media group.

What was your journey to the Resistance Movement like? What made you “wake up” and dare to join, dedicate your soul to the struggle and publicly advocate National Socialism as the superior worldview?

It’s hard to put my finger on exactly what it was that made me “wake up”. Rather, as I think it is for many others, it was more of a process. For me, this process began sometime around 2010 and culminated in my finding National Socialism in 2014-15, and with it finding a worldview that had answers to many of my existential questions.

This started around the time the usurious financial system was explained to me – including how wealth is transferred to some kind of financial elite called the “illuminati”, with the people being turned into interest slaves. Other topics from the so-called truth movement included corruption within the pharmaceutical industry, arms industry, food industry and so on. This set the process in motion – a continuous questioning of all the official narratives.

However, I was not satisfied with their explanation of who was behind it. The idea that it was a “shadowy elite” that runs the world felt far too vague and unclear, so it wasn’t until I realised who was behind mass immigration that the last puzzle piece fell into place. Then I realised the seriousness of the ongoing genocide of White people around the world and decided I had to fight against these evil forces in the best possible way.

You recently gave a lecture at Organisation Days. For those not in attendance, can you say what it was about?

The lecture was divided into three parts. The first and definitely the most exhaustive part was about my journey within the movement, what happened to me and how I have developed since joining in 2016. I wanted to use my experiences to inspire new and old members to strive for – and reach – their full potential.

The second part was about our media group – our propaganda department we have in the movement that I was recently given the privilege of leading. I briefly explained how we work with photography, video, graphic design and sound to convey our message to the people in the best way.

The third part was about our propaganda in general, about how our activists and media group work together to make the movement appear in its absolute best light during activities.

If I’m not mistaken, this was the first time you held a talk like this in front of a large audience. How do you think it went?

Yes, that’s right. It was the first time, and I think it went very well. I had worried about being nervous, but when it was time to hold the presentation, I didn’t feel any nervousness at all. Instead I just looked forward to sharing the material in my presentation, a feeling I sometimes get before an episode of Nordic Frontier.

Something I forgot to mention during my presentation – and which was one of my main points – was the very fact that I can now stand in front of so many people and give a speech is a sign of how much I have grown as a person and the opportunities this organisation offers all individuals. I am actually quite an introverted person, someone who is rather quiet during gatherings, and the idea of speaking in front of such a large crowd would have been completely unthinkable six years ago.

As one of the audience members at the lecture, I can attest that it was very well delivered and received a very positive response. You also held a workshop during the weekend. What was the aim of this idea, and what was the workshop about?

These workshops are an excellent chance for members with knowledge in particular areas to share their learning with other members, who in turn can become involved in the subject and contribute to the struggle.

As an example, my workshop was about Photoshop, as we in the media group are always looking for new talents who can help us grow and get better at what we do. People often ask me if I can teach them how to use Photoshop, so I thought I could at least show them the basics and see if any flames were kindled in any new graphic designers.

One gets the impression that Nest 6 is at the forefront when it comes to media and culture, particularly as we have a number of individuals in the Nest with a lot of knowledge and experience within these fields. Not least in your case. Do you have a theory as to why this could be?

Ah yes, the so-called “Culture Nest”. For my part, I can only answer that I have always been interested in media, and in the movement this is one of the most important aspects of the struggle: communicating with the people via our own media in an unfiltered fashion.

When it comes to northern Sweden in general, maybe it has something to do with the cold, darkness and melancholy?

Definitely. The large distances up here probably also play their part when it comes to people contributing in these ways. As most readers doubtless know, you are also the host of the English-language radio programme Nordic Frontier. How do you view the importance of attracting a non-Nordic audience and forging ties with nationalists outside the Nordic countries?

It’s becoming more and more important every day. In a globalised world, where our enemy does not recognise national borders and fights to undermine White people in all our homelands simultaneously, it’s imperative that we unite in some sort of international nationalist collaboration.

Absolutely. You also make music under the name Tiwaz Tunes. When did you start creating music, and how did you arrive at the genre Tiwaz Tunes is known for?

I have always been interested in electronic music, and it has always been a bit of a dream of mine to be able to create my own music. The basis of the tracks I create is often a recording of someone relating some words of wisdom. I want the music to add something to the speech and make it easier and more interesting to absorb. In the songs we hear people like Andreas Bull Hansen, who talks about Viking-related topics; Muhammad Ali, who opines on how bad race-mixing is; and Jews who casually explain how they use the holocaust as a tool to silence criticism of the Jewish people and their behaviour.

Tiwaz Tunes has since grown into its own little side project with memes and videos on Telegram, where I can create things a little more casually that aren’t directly connected to the Resistance Movement.

To many people in the movement, you are known as a tireless spirit who has a lot of work related to the struggle on your plate – and yet you somehow succeed in finding the time to do it, despite all of life’s other time-consuming responsibilities. Do you have any tips for people who never seem to have time to devote to the struggle?

We all only have 24 hours in the day. What you do with those hours is up to you. Some have a family, children and a time-consuming job, but quite simply, where there’s a will, there’s a way. I always prioritise my family first, but I commit many hours of the week to the struggle, because I think it’s worth it. Our people’s future is the only thing besides my family that is really worth my time, and if more people thought like me, we would get out of this fateful situation in which we currently find ourselves.

A more light-hearted and practical tip for people who struggle to find enough time is to create routines. Create a routine for every activity you perform and improve this routine over time until it’s as good as it can be. Then you’ll notice that you have more time for other things, and that you experience less stress from doing more of the same task.

Thank you for taking the time to answer these questions. If you have any closing words of wisdom you would like to share with the reader, this would be a good opportunity to do so.

To those of you who are already engaged in the struggle, I would like to compliment you all on doing a fantastic job. You are some of the North’s bravest and most self-sacrificing fighters, and one day we will win the Nordic people’s hearts together.

To those of you who have not joined, support the Nordic Resistance Movement! It is the least you can do for these fighters who work day and night to inform our people about the ongoing genocide of White people and what is needed to put everything right. 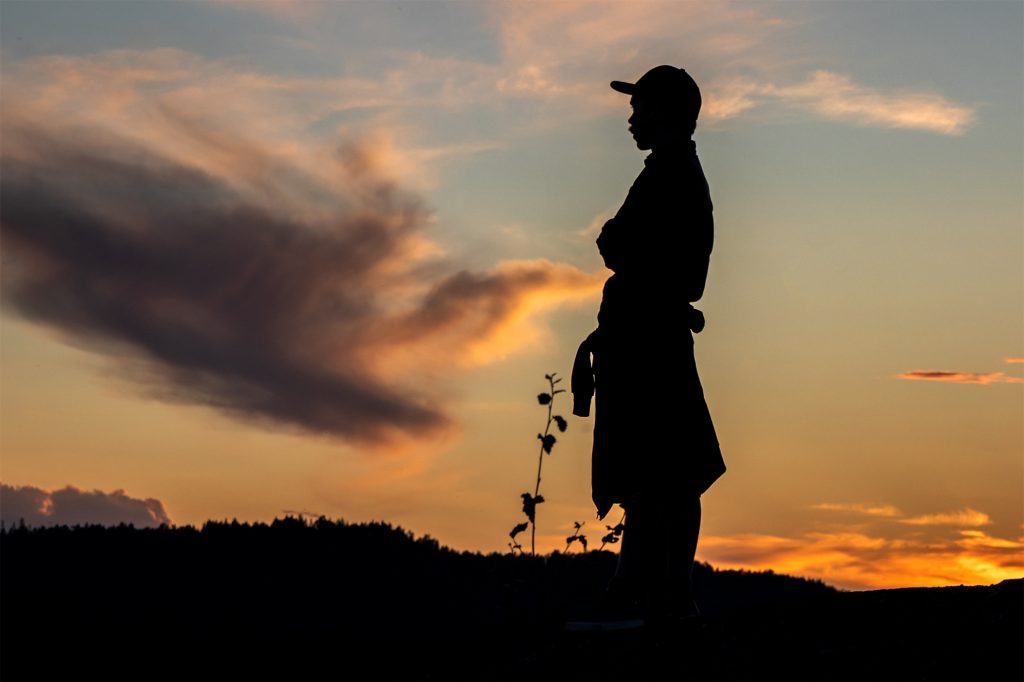