ACTIVISM. Resistance Movement activists were on the streets of Luleå on Saturday, 15 February, to inform the people about the anti-Nordic airline SAS, which earlier that week released an anti-white TV advertisement that trivialised Nordic identity and culture.

The day saw activists from Nest 6 gather in Luleå to encourage a boycott of SAS to show that the Nordic people will never accept subversive and anti-Nordic propaganda.

The anti-white advertisement published by SAS on their YouTube channel on 10th February was taken down after being met with massive negative criticism from regular Swedes. SAS then chose to upload an edited version of the video with the worst anti-Nordic statements removed, in addition to republishing the original version. At the time of writing, the original video has nearly a million views on YouTube, with 106,000 downvotes to just 12,000 upvotes. Many mainstream media outlets have shamelessly called the public anger towards SAS an “organised Russian campaign” and have blamed Russian bots and “Nazis” for the backlash.

On the day of the activity, the Melodifestivalen music festival was also taking place in Luleå, which ensured the city centre was packed with people and that the leaflets went like hotcakes. The activists set up outside Smedjan, Luleå’s biggest shopping centre, and soon realised they had underestimated how many people would be in the city on the day. 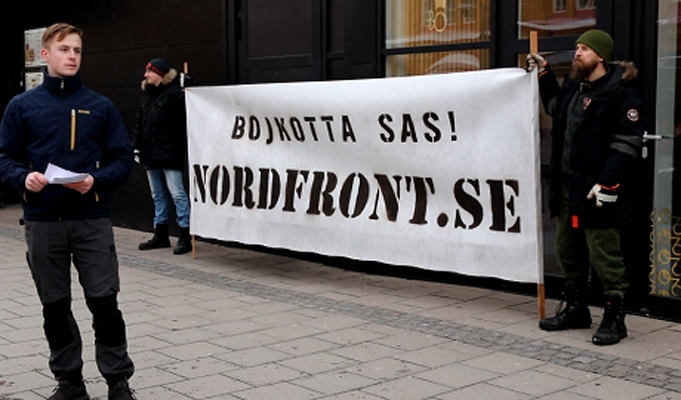 In addition to the above “Boycott SAS” banner, the activists also had their own self-produced leaflets to hand out. The leaflets contained information about SAS’s advertisement and the mainstream media’s mendacious analysis of the public’s reaction. The entire contents of the leaflet can be read below.

This week the Scandinavian airline SAS published an advertisement that provoked intense dislike from many people. In the advert, SAS explained that nothing is really Scandinavian and that everything that is usually connected with Scandinavia actually comes from other countries. The advert even included an African who claimed to be descended from the Vikings.

The company received so much criticism from indignant people that they temporarily decided to take the video down from all their channels – BUT instead of doing some soul searching and apologising for the grossly anti-white and degrading message, they had the temerity to say they stood by it. The public anger caused by the advert was called an “organised attack” from “dark forces”. Afterwards, SAS, in blatant cooperation with Dagens Nyheter, Aftonbladet and Expressen, circulated a conspiracy theory that no one was actually offended by the video. Instead they blamed all the criticism on Russia and Swedish alternative media.

The message in their propaganda is clear: criticism of SAS was never genuine. Those of you sitting at home and stewing in a rage are alone – it’s just Russian “bots” and propaganda machines and a few “Nazis” who care about it. You might as well just stay put and keep quiet.

But we in the Nordic Resistance Movement know that perfectly normal Swedes – like those of you reading this leaflet – have become tired of hearing that Swedes do not exist, that there isn’t any Swedish or Nordic culture, and that all the discoveries and inventions our people have been responsible for throughout history are stolen from other countries. We’ve had to hear this year in, year out from the media, teachers, lobby groups, public authorities, politicians and social commentators.

SAS have since published a shorter version of the advertisement, in which they’ve removed the most anti-Scandinavian statements. But the message in the SAS advert remains: There is nothing that is truly Scandinavian – a message that the SAS management have said they stand fully behind. It is therefore time we Scandinavians speak out! SAS has overstepped all boundaries of decency by first spitting on the Scandinavian people and then topping that with the absurd lie that the public anger is coming from Russia. We urge you and all Scandinavians to boycott SAS until they apologise and stop spreading hate propaganda!

Together we can make a difference!