IDEOLOGY. Jimmy Thunlind explains how the fairy tale of The Emperor’s New Clothes can be used to unmask the Zionists’ methods of securing power – and what the Resistance men must do to be victorious. 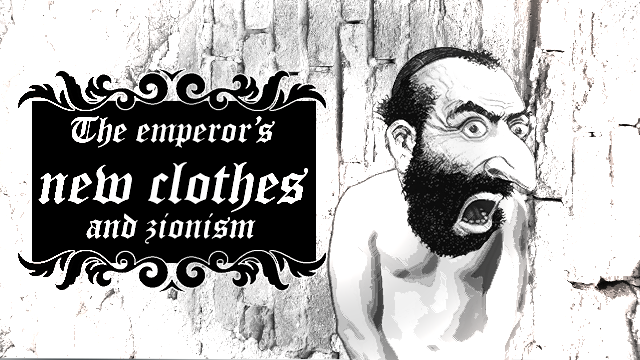 One of the foremost weapons used by the worldwide Zionist movement to gain influence and control – besides economic force and dominance in the media and entertainment – is mass manipulation via psychological “master suppression techniques” that have been honed to perfection over millennia. These techniques affect both regular people and those in power, because they exploit one of man’s deepest urges: the will to be accepted and not stand out, to belong to the herd.

Some may believe themselves to be exempt from these forces. They might think they are not mentally ruled or manipulated by the Zionists, or anyone else. “In Sweden I can think freely and question anything!” they say…

To those who feel this way, I would like to pose you three test questions:

If you answered no to any of these questions, you may be interested in finding out why. What is it that makes you – someone who lives in a society with freedom of speech and thought – unable to think or question what you want to in matters in which it’s possible to arrive at different conclusions? In this article, I shall attempt to answer that query.

Man’s desire to belong to the herd is so strong that it can make us say and do irrational things to prevent us from becoming pariahs. The last thing most of us want is to appear strange, stupid or incompetent in front of others.

One man who has illustrated this dynamic in a masterful way is the Danish author Hans Christian Andersen. In his fairy tale The Emperor’s New Clothes he succeeds in describing the herd instinct, the psychological master suppression techniques and the characteristics required to break this destructive manipulation.

The tale tells the story of an emperor who loved fine clothes and did whatever he could to look attractive and extravagant. A great many foreigners often came to the emperor’s city, and one day two cunning fraudsters arrived and claimed they could weave the most beautiful fabric imaginable. The fabric wasn’t just expensive and beautiful, however; it also had the fantastical property of being invisible to those who were incompetent or stupid.

The emperor absolutely had to have clothes made of such a material, so he gave the fraudsters huge sums of money and gold to weave the fabric and design clothes for him. The fraudsters weaved on their empty looms and demanded more and more money. When the emperor sent his most qualified ministers to inspect how the work was progressing, they couldn’t see any threads on the looms; but as they didn’t want to appear foolish or incompetent, they instead exclaimed what an amazingly beautiful fabric it was.

When the emperor himself came to inspect the cloth, he was mortified: he saw nothing! Did it mean he was stupid and unfit for his station? That was unthinkable, so instead he and his entourage praised the beautiful fabric. When the day of the great procession finally came, the fraudsters dressed the emperor in his new clothes, which fitted so well and had such beautiful patterns. The procession passed through the city, and all the people on the streets and at the windows exclaimed how wonderful the emperor’s clothes were (as none of them wanted to appear stupid or incompetent). 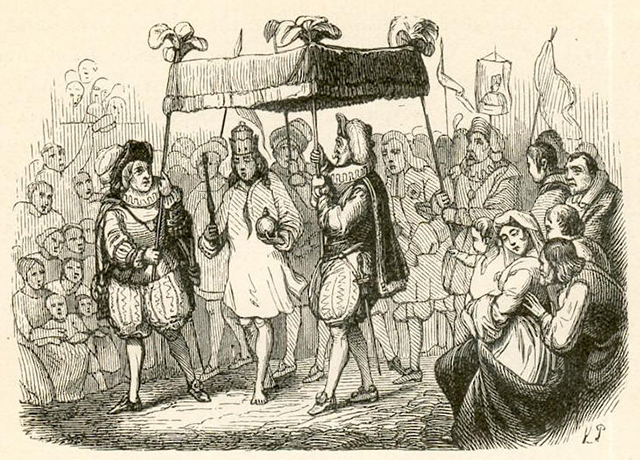 “But he isn’t wearing any clothes!” cried out a little child who hadn’t yet learned to be politically correct and to say the right things to look respectable. The child’s words spread like wildfire in the crowd, and finally everyone shouted, “He isn’t wearing any clothes!” The emperor was unnerved because he sensed they were right, but he couldn’t show it and continued to walk, with his head held even higher, in the clothes that didn’t exist.

The Swedish regime as the emperor

This genial tale has many real-world applications. The interpretation I will explore is that of the emperor corresponding to the Swedish regime, which loves to parade around in fine clothes, making a show of its benevolence, humanism and feminism in front of the whole world. The foreigners and fraudsters who come to the city are the Zionists who come to manipulate the regime for money. Here the deception is not tricking the emperor and everyone else into accepting the invisible, non-existent clothes, but exploiting man’s urge to avoid standing out from the crowd and being stigmatised. By popularising the lie that everyone who cannot see the clothes is stupid and incompetent, the Zionists silence the entire population and make them accept the situation. That is to say, all citizens who do not accept and support the regime’s approved views and values are stupid and ignorant.

This trick is both cunning and wicked. It has a stronger effect the higher up one goes in the societal hierarchy, because the consequences for those exposed as incompetent or stupid are far greater if they have a lot of power and influence. Among the recognised master suppression techniques, this form of manipulation is an example of “Ridicule” and “Imposition of Blame and Shame” because the fraudsters make people both feel stupid (“Surely everyone knows this is how things are?”) and be ashamed for something that isn’t their fault (“Not believing in these values led to the Holocaust!”).

How these lies, which the Zionist fraudsters earn enormous amounts of money on, have succeeded in permeating our entire society can be explained by returning to the three test questions earlier in this article.

The lie that mass immigration of racial foreigners enriches and is even necessary for our country has been popularised as an incontrovertible truth by the Zionists. Those who question the benefits of multiculturalism are automatically branded as stupid and evil.

When some childish individual dares to question why our pension money is no longer sufficient, the dutiful regime answers that it is our own fault: we are too healthy and are living too long. The obvious reason, that 1.5 million foreigners are also being given a share of the pension pot without having worked for it, is not dared to be voiced, despite the fact that everyone – not least those in power – knows it to be true.

When some other naive soul writes on social media that mass immigration must be the reason for the housing shortage (because we Swedes have had too few children the last 30 years to cause it), or that suburban violence and gang rapes have increased, they are convicted for incitement to racial hatred and are branded as ignorant and hateful. 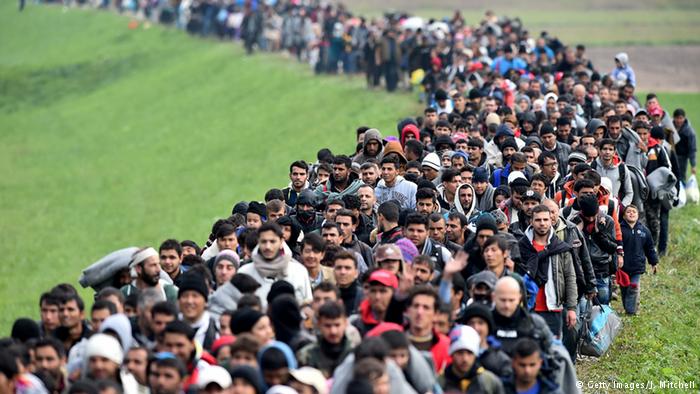 The Zionist swindlers have made the regime believe it appears beautiful and glamorous by accepting the most migrants per capita in Europe and by gladly spending billions of taxpayers’ money every year on so-called aid programmes with no critical evaluation – with the result that the majority of the money ends up in the pockets of the corrupt, or goes to arms sales or human trafficking. The fact that mass immigration is bought with borrowed money and will have to be paid for by our children is ignored; the important thing is to look good to the rest of the world.

When patriots highlight the fact that organised mass immigration in practice entails a slow genocide of our race, the regime and large sections of the public just chant all the more hysterically: “Oh, what beautiful clothes! What patterns and what colours!”

Another lie established as inviolable truth is that our media is free and independent and that the culture and entertainment industry has no prescribed agenda. If one asks questions as to why a majority of media companies, book publishers and film production studios are owned and operated by Jews despite their making up an insignificant percentage of the population, one is immediately branded as ignorant and stupid. And hateful. The fact that the biggest media outlets have owners who support the terror state of Israel, who applaud the racial replacement in the Nordics and who believe that freedom of speech should be curtailed for inconvenient critics of the regime naturally makes their pretensions to truth and objectivity just as transparent as the emperor’s clothes.

In The Emperor’s New Clothes, the most enigmatic garment is the long invisible train on the cloak that several chamberlains hold up as they walk behind the emperor. This train is especially beautiful. In the case of the Swedish regime, the train corresponds to the holy Holocaust myth, which the system is in need of constant assistance to hold up. Despite Swedes’ having had nothing to do with the alleged Holocaust, despite the complete lack of forensic proof for its occurrence, and despite the fact that so-called survivors have been caught innumerable times in lies, exaggerations and fantasies, it is still the most forbidden subject to question. Those who dare to do so are sentenced by the regime to prison and eternal stigmatisation.

The Emperor’s New Clothes teaches us many important lessons. We humans are herd animals and as such are naturally inclined to be influenced by group thought and the Jante Law mentality. This inclination is intensified when the powers that be brand all forms of opposition and questioning as ignorance, stupidity and hate. This carefully implemented conformity has been one of the Zionists’ foremost means to control and exploit us free people.

As such the need is urgent for more of us to dare to be childish, dare to cry out the forbidden but obvious: “The emperor has no clothes! It’s all lies! It’s not we who are stupid!” Because the more who shout, the more will join, until all the people rise up and cry in unison: “No more lies! Seize the fraudsters, force them to pay back every krona and then throw them out! Put the emperor in chains and give power to the little child who first shouted!”

Thus we start a white revolution. 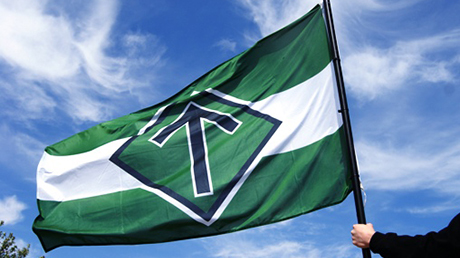