ACTIVISM. Members and activists of Nest 6 in Sweden gathered outside Luleå town hall to protest against the treacherous politicians’ maltreatment of an elderly man, who later died from lack of care.

Eighty-year-old Stig Markström was severely neglected by the elderly care service in Luleå municipality. His daughter Marina wrote on Facebook that her father was 182 centimetres tall and weighed 50 kilos right before his death.

Despite paying for the home care to clean his apartment every other week, his home wasn’t cleaned for ten weeks. At one point his prosthetic teeth hadn’t been cleaned for eight days.

The old man was not capable of getting out of bed on his own and was left lying in his own faeces. He hadn’t been able to get out of the bed for days, since his lifting device was out of order. He was unkempt with uncut nails and wasn’t shaved for several weeks.

A few days after finally being admitted to a care home for proper attention, after months of continuous neglect and staunch refusals to take him in, he passed away. 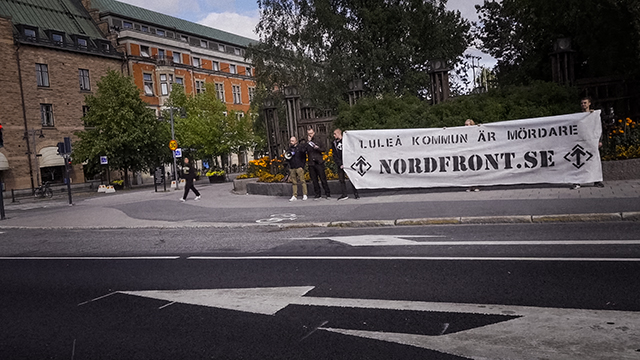 That our elderly, who have built this country with their hard work and their tax contributions, are now left to starve to death under humiliating circumstances so that funds can be spent on never-ceasing mass immigration, is not acceptable. It is the Nordic Resistance Movement’s duty to show the cowardly men and women in power that their treachery of the people has real consequences and will not pass us by unnoticed. 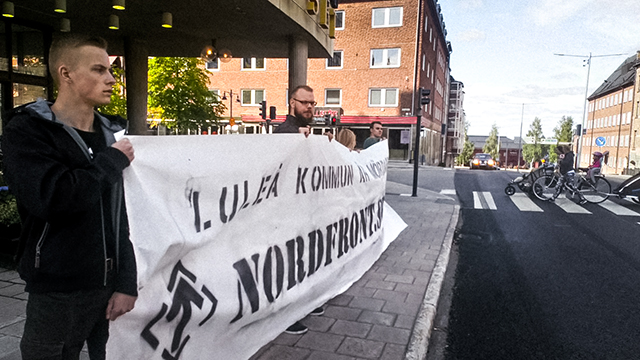 On Friday the 2nd of August, armed with a megaphone and a banner displaying the message ”Luleå municipality are murderers”, members and activists of Nest 6 went to the town hall to protest. On site, David Nilsson, chief of activist group 601, held a powerful speech.

In his speech, David Nilsson directed the following words to the townspeople: 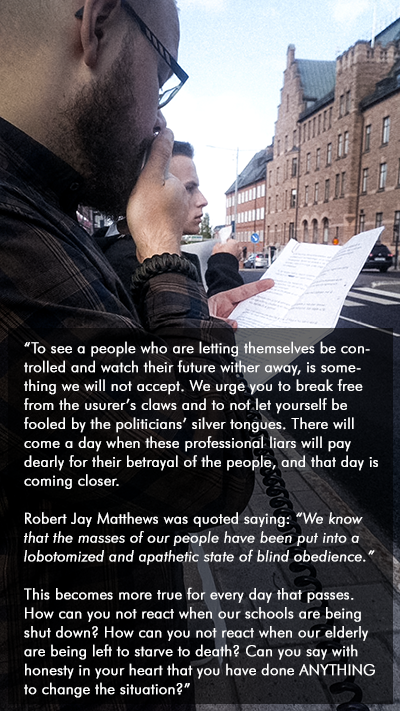 He then finished with the same call quoted from the leaflet that is being handed out to Nordic people all over the North:

The revolution begins with you!