Home Resistance News The establishment weeps after the Resistance Movement’s brave action against the world’s...

LYING PRESS. The laser action against the holocaust conference in Malmö has received attention from several newspapers and numerous social media users. 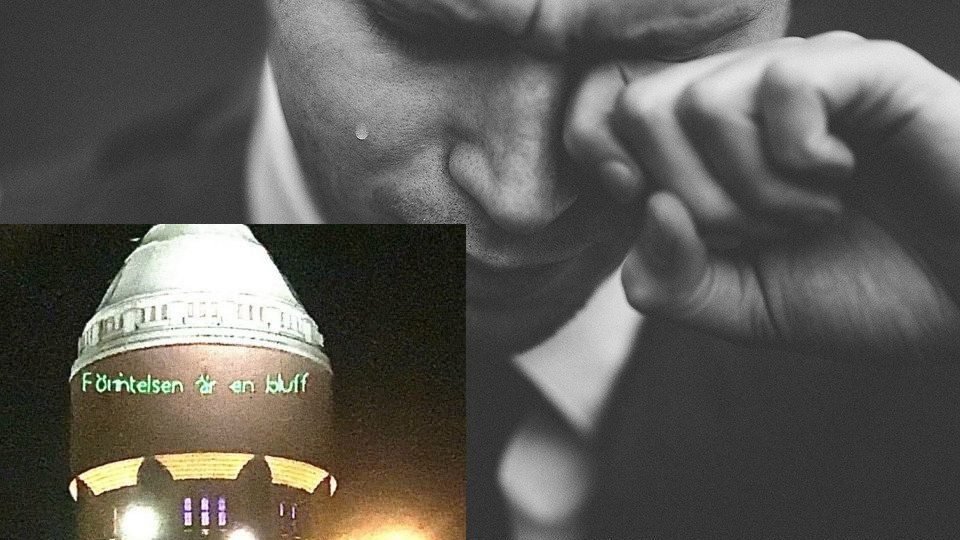 Several newspapers have now covered the spectacular action that Nest 3 activists conducted the night before a major holocaust conference took place in Malmö.

Despite one of the largest ever police operations in southern Sweden, the activists travelled around Malmö on bicycles and other means, projecting laser messages such as “The holocaust is a hoax” on famous and prominent buildings in the city. Perhaps the most talked-about of these was Malmö Synagogue.

Just a few hours before the action, one of the world’s most powerful people, Ronald S. Lauder, the chairman of the World Jewish Congress, met Stefan Löfven to hold “vigorous” speeches against “anti-Semitism” in the synagogue.

Lauder thinks that the myth of the holocaust is still an important tool for silencing the world’s population, who are rising up against globalism and Zionism to an ever-increasing extent:

“Today, 76 years later, people have forgotten. So here we are. Anti-Semitism has not disappeared. It has grown the world over.”

Expressen/Kvällsposten wrote the following about the action:

From Tuesday evening to the early hours of Wednesday morning, the police received several alerts that a Holocaust-denying message had been projected in various places in central Malmö. “The holocaust is a hoax” read the message, according to police information. One of the affected places was the synagogue, just hours before the Holocaust Conference in Malmö began.

An anonymous Jew complained about the incident to SVT News:

SVT also wrote that this is not the first time the Resistance Movement has conducted this type of action and mentioned the high-profile laser action in Gothenburg that took place on 27 January this year, when Älvsborg Bridge was illuminated on the so-called Holocaust Remembrance Day.

As expected, the lying press all but described the incident as a terrorist attack by stating there was “information” that the “Nordic Resistance Movement (NRM) claimed responsibility for the act”, even though motstandsrörelsen.se openly wrote about the activity long before the establishment media did. When the activity is described as “an act” that someone is “claiming responsibility for”, it’s clear that the media is making a crude attempt to portray the fully legal Nordic Resistance Movement as a criminal organisation.

According to these anti-Nordic newspapers, holocaust denial is almost on par with terrorism. To them, denying the holocaust is – and has long been – compatible with evil, just like National Socialism. The anti-White newspapers contribute daily to the holocaust of the Swedish people with their lying journalism and selective news blackouts.

The same newspapers that claim that denying the holocaust is practically an act of terrorism also refuse to acknowledge that a holocaust of the Swedish people is taking place via population exchange.

The police have also commented, but in contrast to other cases, they interjected very personal and emotional values into their statements about the action, calling it “deeply distasteful”. Furthermore, Nils Norling, the spokesman of Malmö police, continued to say that:

Under current law, it is not a crime to deny the Holocaust. But since the projection was directed specifically at the synagogue, we have made the assessment that the location, the messages and the context – with the ongoing conference – together warrant a preliminary investigation regarding incitement against ethnic groups.

The Resistance Movement did not just receive coverage in the anti-White media. Many nationalists have paid tribute to the action. Below are some comments from an article on Nordfront.se about the action:

The largest ever police operation in southern Sweden couldn’t stop the truth from coming out.

Zionism and its corrupt henchmen cannot stop the truth, in spite of political repression. The Nordic Resistance Movement is the only real opposition to a destructive anti-White agenda. Folk community!

A fantastic initiative! When other “alternative” media outlets publish articles acknowledging the holocaust, the Resistance Movement shows they are the only way. Wonderful!

This action has a psychological weight that makes victory feel close at hand!