ACTIVISM. Here is a report of the tumultuous activity that went down on the streets of Lund and a summary of the propaganda put forth by leftist activists and the media. 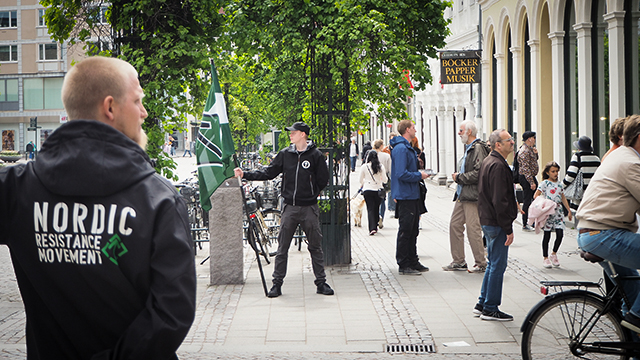 Nest 3 went to Lund on June 1 and set up on the pedestrian street just outside Stortorget. There were a lot of people out there, so the activists got a lot of exposure; discussions were held both with people who were positive and those who were negative.

After about half an hour, people from the Left Party came and placed themselves nearby. The Left Party’s Hanna Gunnarsson was present, the same one who urged her Twitter followers to destroy the Sweden Democrats’ election posters in 2018. “Tear down, paste over, destroy! Shit must be gone by tomorrow.” For this, she was prosecuted; Lund’s district court wrote the following:

The Lund District Court decided Hanna Gunnarsson’s purpose was to raise awareness and not to call for damage. The Court emphasizes that punishing incitement instances limits the constitutional freedom of expression and should therefore be applied restrictively.

Gunnarsson was released by the court; the Left Party saw no issues with her undemocratic statements, and she is now a member of parliament for the party.

To return to yesterday’s confrontation: The Left’s meeting-disruption tactic in Lund has always been to get as close to the Resistance members as possible and then scream and shout to drown out any dialogues between the activists and the people. Knowing Gunnarsson’s and the Left’s history in Lund, it’s not rocket science to understand what would happen in the next hour. During a fierce argument with Gunnarsson and her ilk, there was no talk about “Tear down, paste over, destroy,” as there were only a dozen of them.

Dividing the street between the Left and the Nordic Resistance Movement is just a rhetorical trick from the Left. Their most commonly used slogan is “No racists/Nazis on our streets.” This slogan shows how they think they own the streets. The leaflet distribution continued and several long and constructive discussions with the local residents occurred. 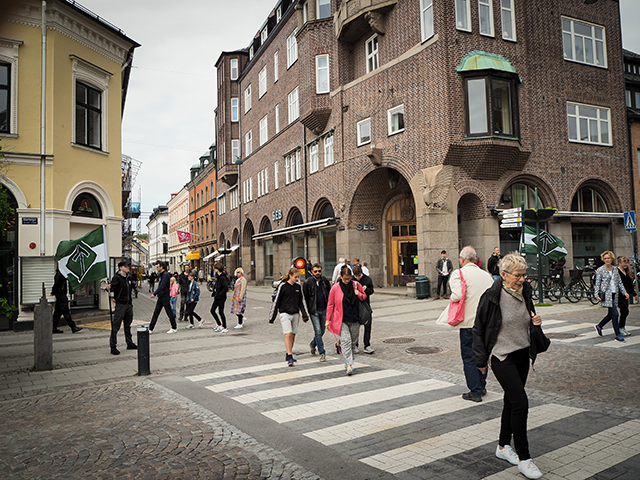 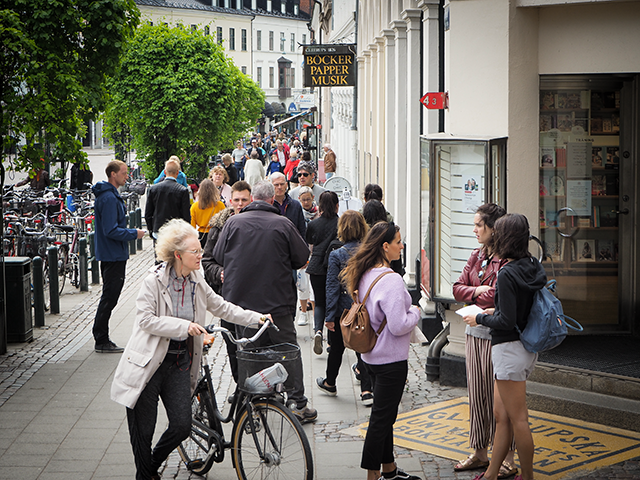 The Left also likes to act with more of a “Might is right” mindset than the other established parties. Their rhetoric is “soft” when they feel outnumbered, but when they feel they have the upper hand, then the slogan of “our streets” comes forth. More Leftists came to the scene, and they became more rowdy in their screaming, even using a megaphone to try to control public opinion. Several locals who were having discussions with the Resistance Movement’s activists complained that they had difficulty hearing. Gunnarsson, who previously wanted to share the streets, did not call for any silence. The police force also did not care about the din, allowing the reds to keep screeching.

“When they started walking along the street, a group of young people followed. I understood later that there were clashes at Ban Square.” Hanna Gunnarsson says she perceived that the counter-demonstrators knew each other and came as a group.

These “counter-demonstrators” were in fact her own youth party, Young Left, which both she and SVT try to hide away.

The Young Left group, which before the fall of the Berlin Wall was called Communist Youth, has also posted pictures of these “counter-demonstrators” on their Facebook page. The fact that Gunnarsson could not recognize people from her own youth party in Lund is nonsense. The members of her youth party also openly fraternized with infamous Antifa members. Left Party and Jonas Sjöstedt allow this to be on their election posters.

Also interesting is how the media spins this as a demonstration. When it comes to the Nordic Resistance Movement, the (((independent))) media tries to paint the distribution as a “non-licensed demonstration,” suggesting that the movement has done something illegal when, in reality, it is not illegal. When it comes to the Young Left, however, then it is printed out as a demonstration, despite the fact that the Young Left most likely did not apply for permission last Saturday.

About an hour and a half after the start, it was decided to pack up and go home. But this is when things started to heat up. The chanting intensified, and the Left (Young Left and Antifa-Lund) followed after the activists. Now the customary propaganda would be created: “The Left drive out the Nazis from Lund!”

The left became increasingly uppity and daring, inching closer and closer until they were only two arm-lengths away from the activists. Then, the activists stopped, and turned around.

In an attempt to exacerbate the situation, the left claimed that the Resistance members who were not arrested were chased out of Lund. In fact, a handful of black-clad, masked characters did follow the group that had not been arrested by the police. A charge was made against these red “revolutionaries,” who all tucked their tails and fled. One person got so panicked, like a rabbit in front of a car, they ran straight into a parked car and collapsed. His “comrades” had run too far, and instead, just stood and watched as the activists caught up with him.

To conclude, it can also be mentioned that the reds were driven right into the waiting arms of the police. Neither this time, nor any other time have the streets of “Red Lund” belonged to anyone other than the Nordic socialists!