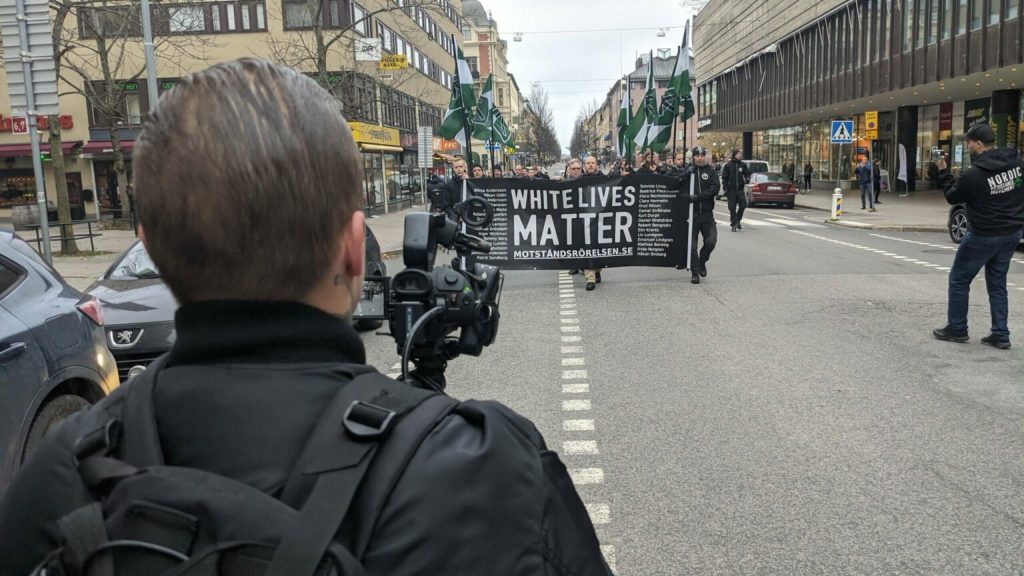 Activists and members from the Nordic Resistance Movement went to the county capital Örebro on Saturday, 7 November, to hold a flash demonstration.

The weather on the day was cloudy and a little windy, but it did little to hinder the joy the comrades felt at gathering together to spread the Resistance Movement’s message.

The number of demonstrators was limited to 48 to respect the authorities’ recommendations of not gathering in groups of more than 50. The participants formed into three marching lines, and the Tyr rune flags fluttered beautifully in the wind as the call sounded to march off.

Chanting resounding slogans, the demonstrators marched in a disciplined fashion up Drottninggatan and into the populous commercial city centre. The theme chosen for the demonstration was “White Lives Matter”, which was also one of the chants heard echoing through the streets. To complement the march, a large number of posters reminding people of the White Swedish victims of multiculturalism had been placed along the marching route.

When the march reached the city’s magnificent town hall, the procession went across Stortorget and then onto Köpmangatan, where many Saturday shoppers stopped to take photos and hear the chants of the Resistance men and women.

The procession came to a halt at Våghus Square, where a large banner was unfurled with the text “White Lives Matter” and a list of names of White Nordic martyrs. Flag bearers stood at both ends of the banner, and the remaining activists spread out at “corona distance” around the square.

Nest 8 chief Jimmy Thunlind then held a powerful speech in front of the banner via megaphone. In addition to the attending activists, there were a large number of Örebro residents and other third parties present to listen to the speech. Thunlind began by exposing the Black Lives Matter movement in the USA and Western world as a liberal-Left, Zionist campaign that derides and debilitates the White population with mass immigration and physical attacks in order to make us genuflect and be ashamed of being White.

In contrast, Thunlind emphasised that the slogan White Lives Matter means we will never yield to the Zionist-orchestrated occupation of White countries, and that we will fight until we have won victory. The slogan also signifies that we will never forget the hundreds of victims of violence from racially alien occupiers, and that these victims will live forever in our memories.

The speech concluded with a powerful exhortation to the audience to join the Nordic Resistance Movement. The whole group then remained on the square for half an hour to talk with interested people and give out brand-new leaflets with the White Lives Matter message.

Nordfront TV was present to livestream the event and also conducted interviews with Pär Öberg, Markus Nordh and Jimmy Thunlind.

All of the participants subsequently assembled for the march back, during which even more powerful slogans were chanted. Curious onlookers stopped on the pavements to watch, and some locals hung out of tower block windows to witness the impressive manifestation. No antagonists showed up, and even the police appeared to be visibly satisfied with the successful activity.