WILDERNESS ACTIVITY. Activists, members and their children gathered at a comrade’s house for a hiking and camping trip in the North Bothnia wilderness on 15 July. 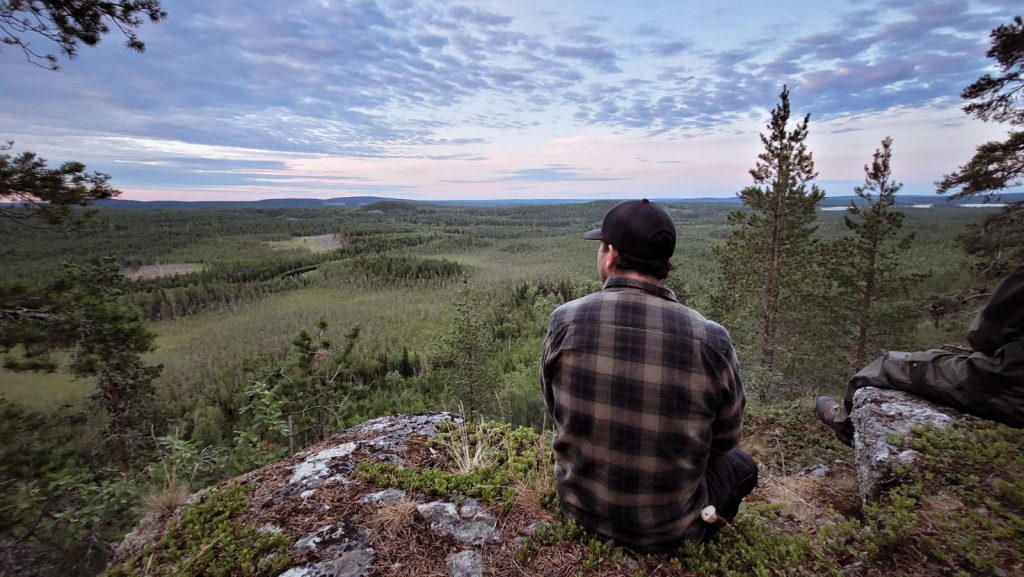 After the last man had arrived at the gathering place, the march set out along forested paths, where it didn’t take long before a large number of horseflies joined the company, buzzing relentlessly and assailing several of the walkers.

One factor that made the hike extra challenging was the hot weather, which peaked at 27C (in the shade) during the day’s blinding sunshine. Such weather isn’t to the taste of many North Bothnians, and it was quite tough-going for a few of the participants. Much of the water that had been brought along was drunk during the hike.

A few hours later, the company reached the mountain that was the main destination for the journey. The mountain proved to be very steep, so some members of the party walked around it with the children in tow in order to find an easy ascent, while others braved the slopes and climbed up with full packs.

When the whole party had reconvened at the summit, they took a much-needed break and consumed their packed lunch and lots of water, before it was time to further explore the mountain, which offered many striking views over the surrounding North Bothnian countryside.

When the mountain was inspected, it was established that it was too rocky to pitch everyone’s tent there, plus the steep cliffs made it unsuitable to have the children around. It was therefore decided to go down to the forest at the base of the mountain to find a good place to set up the tents.

By the time the group were in the forest, the horseflies had made way for a considerably more annoying winged insect – North Bothnian mosquitoes. To avoid them, and to cool off from the scorching sun, the party went for a dip in a beautifully located river.

When everyone was dry and the tents had been put up, it was decided to go up the mountain again to light a fire and grill dinner. By this point, many in the party had grown rather exhausted from all the hiking and heat. Rest and replenishment of lost energy was greatly needed.

This moment of comfort didn’t last long, however, as it was soon realised that virtually all the water had been drunk and that a solution needed to be found. The main responsibility for this task fell on David Nilsson, who had to guide the company in the construction of a water filter with the help of his copy of the military’s Survival Handbook.

Construction of the water filter began by gathering charcoal from the extinguished fire and then walking back down the mountain to find a bog where peat could be collected. Next, the group walked back to the stream where they had previously bathed in order to gather gravel and sand for the filter and collect water to pour through it. Meanwhile, some participants took the opportunity to have another dip in the river, if only to escape the mosquitoes for a little while. By the time they were on dry land again, some of the water had been filtered, whereupon it was boiled and everyone could finally quench their thirst again.

By now it was fairly late, so the group went back to the tents so the children could sleep. Meanwhile, some of the adults climbed to the mountain summit again to socialise and watch the midnight sun next to the fire, before it was time for them to conclude the day.

The morning after, everyone woke up early following a good night’s sleep, made breakfast and packed up all their things, before beginning the long hike back to the cars. Not long after the hike resumed, the group was out of water again and the sun’s heat was strong, which made this leg of the journey extra difficult. Finally, the company reached a farm, where the farmer, in a show of true folk-community spirit, refilled everyone’s containers with ice-cold, refreshing water – which gave the participants the final energy required to reach their destination.

When everyone was back where they had started, the tired but happy party agreed that yet another highly successful wilderness activity had been accomplished by Nest 6.