STATE OPPRESSION. The corrupt judicial system in Sweden has punished another National Socialist because of his opinions. Here, Victor Johansson explains the corrupt police’s tactics during street actions. 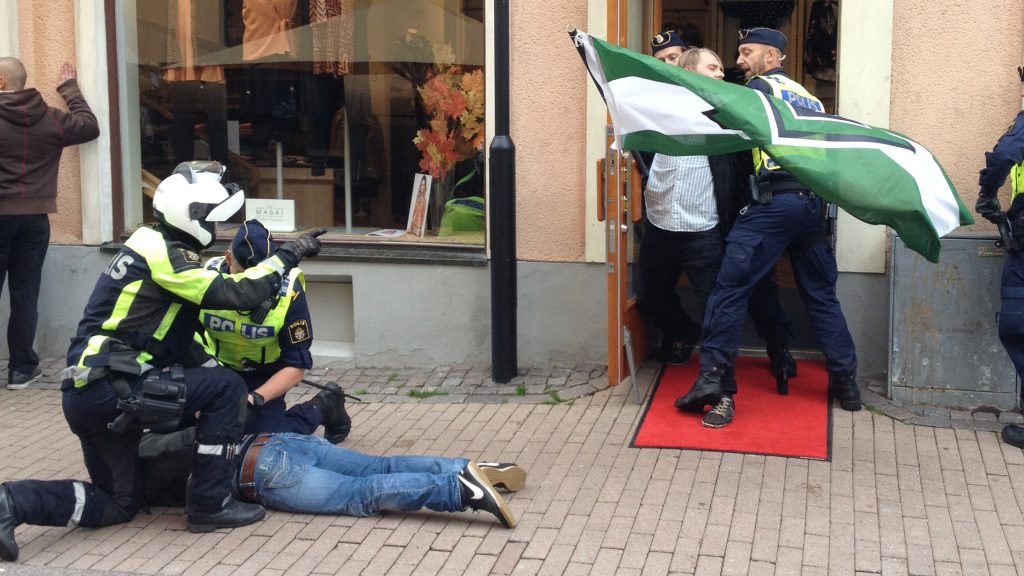 In September a National Socialist was convicted for violence against an official after defending himself and his comrades during a protest against a Pride parade in Kalmar, Sweden, in 2017. The incident occurred when the police and an LGBTQP supporter went on a joint attack against the Resistance men, during which a policewoman was knocked over. Motstandsrörelsen.se has been in contact with the now convicted man, who made the following comment:

“On that day over four years ago, the police clearly demonstrated that one of their tasks is to silence organised criticism of the system. Today, the district court demonstrated how the police’s despicable work is rewarded with the payment of damages.

“It may have been unwise to approach the policewoman in a rash manner, but it was caused by a demonstrator pulling at a banner for the second time and still being allowed to continue while the police started detaining the comrades who interrupted her.

“Unsurprisingly, the opponent of free speech walked free after the police had reported her, with the case being dropped shortly thereafter.

“One positive thing about this is that the policewoman can no longer see a Pride march without thinking about the Resistance Movement and the ‘awful attack she was subjected to’ over four years ago.” 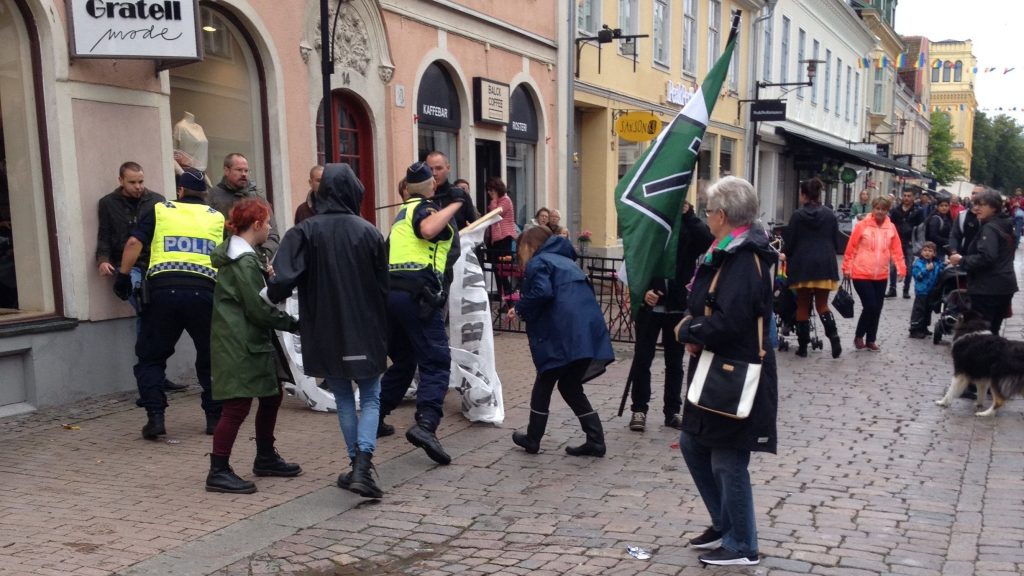 The police can then lie to the public via the media by claiming that they were at the scene as protectors of public security, that violence occurred, and that the perpetrators were taken into custody – when the truth is that they were there as political agents with the task of preventing the opponents of the ruling powers from spreading their views, and that they succeeded in doing so via a cunning and underhanded process.

The reason the police do this, instead of directly attacking and arresting the nationalists, is partly because they understand that it reflects badly on them if they initiate violence to silence oppositional views, but also because they often lack the courage to initiate violence themselves when they know they have no legal basis for it. Instead, when the police attack nationalists in response to our defending ourselves against attacks from a third party, a confusing situation arises in which the police’s culpability for silencing dissent becomes much less clear. It also causes a violent tumult, which the police can react to instinctively, instead of having to summon up the courage to go on the attack.

After the police arrest the dissidents, they can, via the strictest possible interpretation of the law, start investigating the dissidents for any crimes committed during the police assault – often violence against an official, as in the case in Kalmar. Violence against an official is a crime that in practice prohibits people from exercising self-defence when attacked by the police, even if the police have no legitimate reason for their actions – again, as in this case. The whole affair becomes a tyrannical process in which the traitors send out their obedient assailants to beat down dissidents, and then further punish the dissidents for their opinions via legal sanctions for insignificant or even fabricated crimes.

This verdict, like so many others before it, is in no way about administering justice or punishing criminality. The purpose of the verdict is purely to hinder the work of the ruling powers’ political opponents, so they can retain power for themselves.

The convicted National Socialist has some closing words:

“I would also like to remind people about the video that shows the Resistance Movement defending itself against political opponents in Oskarshamn a few weeks before the incident in Kalmar. That time, our opponents had to skulk away after failing in their errand, but what would have happened had the police been there?”