ACTIVISM. Three nests of the Nordic Resistance Movement met in Norrköping for a public rally earlier this month. 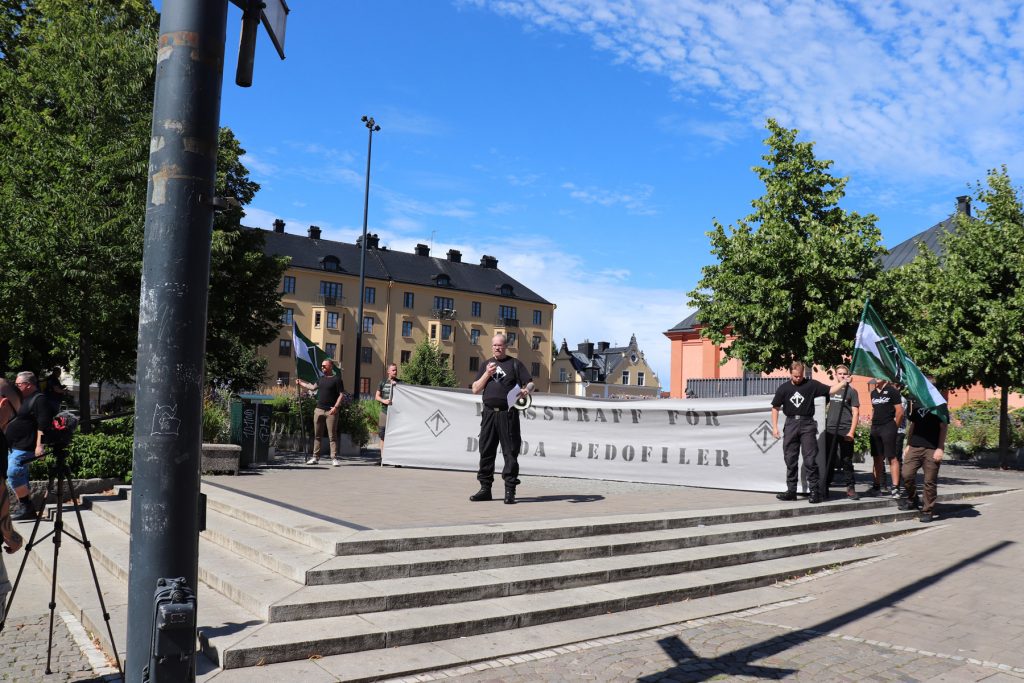 On Saturday 8 August, activists and members from Nest 1, Nest 7 and Nest 8 met in central Norrköping to hold a rally with the message “Protect the children!”

The rally was held in response to several cases of shocking assaults on children that have happened in Norrköping in recent months – including the three-year-old Esmeralda, who was murdered by her drug-addicted parents, and the nine-year-old girl who was brutally raped and nearly strangled to death by a racial alien.

A special leaflet with the title “Protect the children!” had been created for the day, along with a large banner with the text “The death penalty for convicted paedophiles”.

After the banner had been unfurled and the flag bearers had taken their positions, the activity began with Magnus Wardmo, chief of Nest 7, holding a powerful speech on the theme of the day. Magnus emphasised that the attacks on the young girls are intrinsically connected to the destructive nature of multiculturalism, and singled out the politicians, civil servants and law courts as being directly responsible for so many children suffering in today’s liberal-democratic society.

In his conclusion, Magnus detailed the demands of the Nordic Resistance Movement:

After the speech, the activists spread out to distribute leaflets and talk with the people of Norrköping. Many stopped and asked questions about the message. One woman wondered aloud as to why the Resistance Movement was allowed to be on the streets and why the police didn’t intervene. When asked by an activist if she would rather live in a society without the general right to freedom of speech, she softened and engaged in a long conversation.

When a couple of hours had passed in the 30-degree heat, all of the leaflets had gone and the group formed up to walk towards the meeting place. Marching in ranks with flag bearers in the lead, the participants headed out of the city centre with their shouts of “Nordic revolution – without pardon!” echoing through the streets and buildings.

The whole activity passed very successfully, and many of the comrades from the various nests took the opportunity to catch up and socialise afterwards.