ACTIVISM. On the evening of 30 August, the Communist Party were scheduled to gather in a park in central Varberg, Sweden, to give speeches and sing songs. As such, a delegation from Nest 2 travelled to Varberg to see what the communists had to say and to spread the message of a healthier and more worker-friendly alternative. 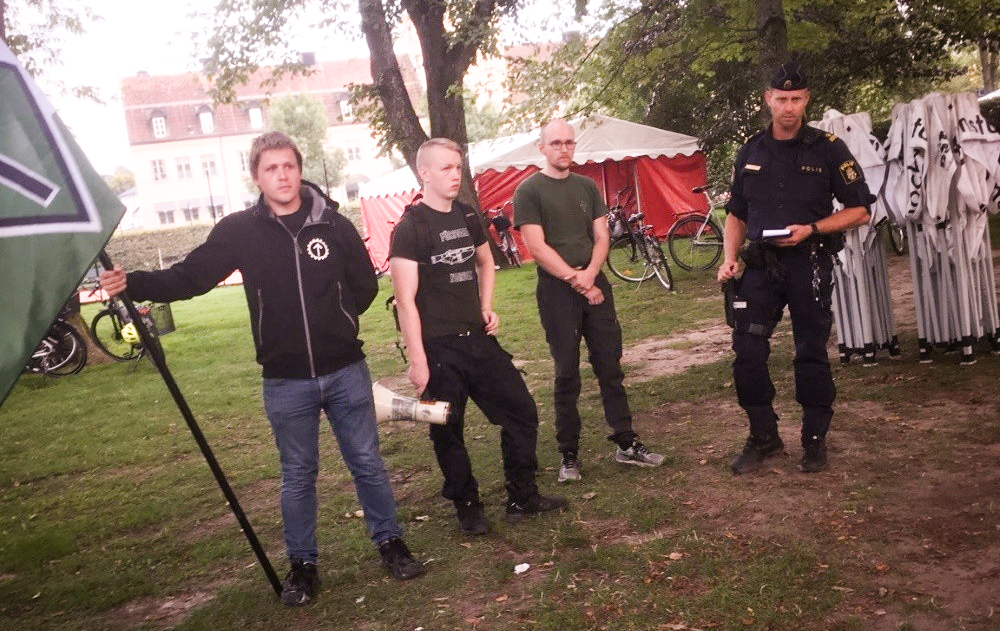 The Resistance men positioned themselves with a flag immediately outside the festival area, where they were highly visible to the attendees of the communist meeting as well as to regular people in the vicinity.

Shortly after arriving, the activists began to give out leaflets to passers-by. It didn’t take long for the police to come and ask questions about what the comrades were doing there, why they had a megaphone and who was responsible for the activity. When the police didn’t get any answers to their questions, they quickly became irritated and proceeded to take photos of all the activists before retreating to a safe distance.

Some insolent youths tried to take a stand against the Resistance men by spitting in front of them. They soon learned that this isn’t the way to behave and were subsequently moved away by the police. No other incidents occurred, and after just over an hour the activists moved on from the park and headed to the streets of central Varberg.

The comrades walked along the streets with the megaphone, urging the people to join the Nordic Resistance Movement for a free and united North.

The police didn’t approve of this and stopped the activists, claiming they were disturbing the peace. They took the activist with the megaphone to one side to ask questions, but after a short discussion, the activists were allowed to continue on, which they did.

A little while later the Resistance men concluded the activity, happy with the large amount of exposure they received relatively problem-free.