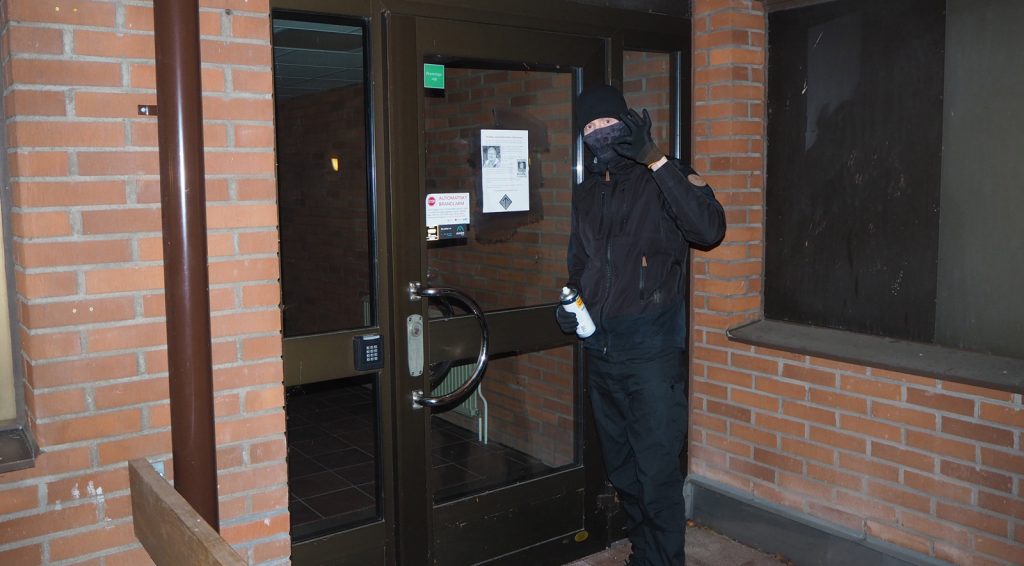 The politician and Centre Party member Christer Yrjas is known for his participation in the TV programme Bonde söker fru (Farmer Seeks Wife) – although in the programme he was looking for a man. Alternative media revealed that Yrjas has housed the convicted paedophile Joakim Jonsson at his home for several years, and that more convicted paedophiles live on the neighbouring estate, which Yrjas also owns.

As a response to the accumulation of paedophiles in the small village of Agusa where Yrjas lives, activists from Nest 3 went to the village on 22 December to ensure the neighbourhood received information about who Yrjas is and the paedophiles living with him. 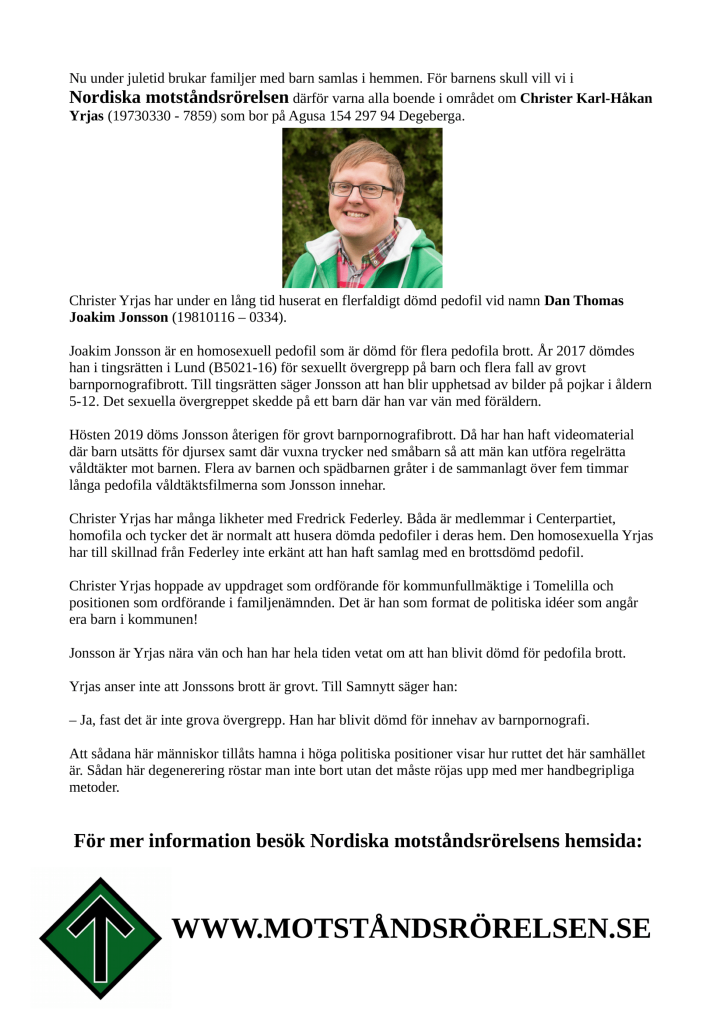 At Christmas time, families and their children usually gather in their homes. For the sake of the children, we in the Nordic Resistance Movement therefore want to warn all residents in the area about Christer Karl-Håkan Yrjas (19730330 – 7859) who lives in Agusa 154 297 94 Degeberga.

Joakim Jonsson is a homosexual paedophile who has been convicted of several child sex offences. In 2017 he was convicted in Lund District Court (B5021-16) for sexual abuse of children, and several counts of serious child pornography offences. Jonsson told the court that he was aroused by photographs of boys between the ages of five and 12. The sexual abuse was committed against a child whose parents were friends with Jonsson.

In autumn 2019, Jonsson was again convicted for serious child pornography offences. This time he was in possession of videos featuring children being subjected to bestiality, as well as videos in which adults pinned down young children for men to rape them. Several of the children and infants can be seen crying in the combined five-hour-plus paedophile rape films Jonsson possessed.

Jonsson is Yrjas’s close friend, and Yrjas has known the whole time that Jonsson has been convicted for child sex crimes.

Yrjas does not regard Jonsson’s crimes as serious. He told Samnytt:

“Yes, but they are not serious abuses. He has been convicted for possession of child pornography.”

The fact that such people can get into such high political positions shows how rotten this society is. Such degeneracy cannot be voted away but must be cleaned up with more resolute methods.

The activists put posters on the sewing studio on the road into Yrja’s farm, which is likely used by the paedophile Joakim Jonsson, who has an interest in clothes. 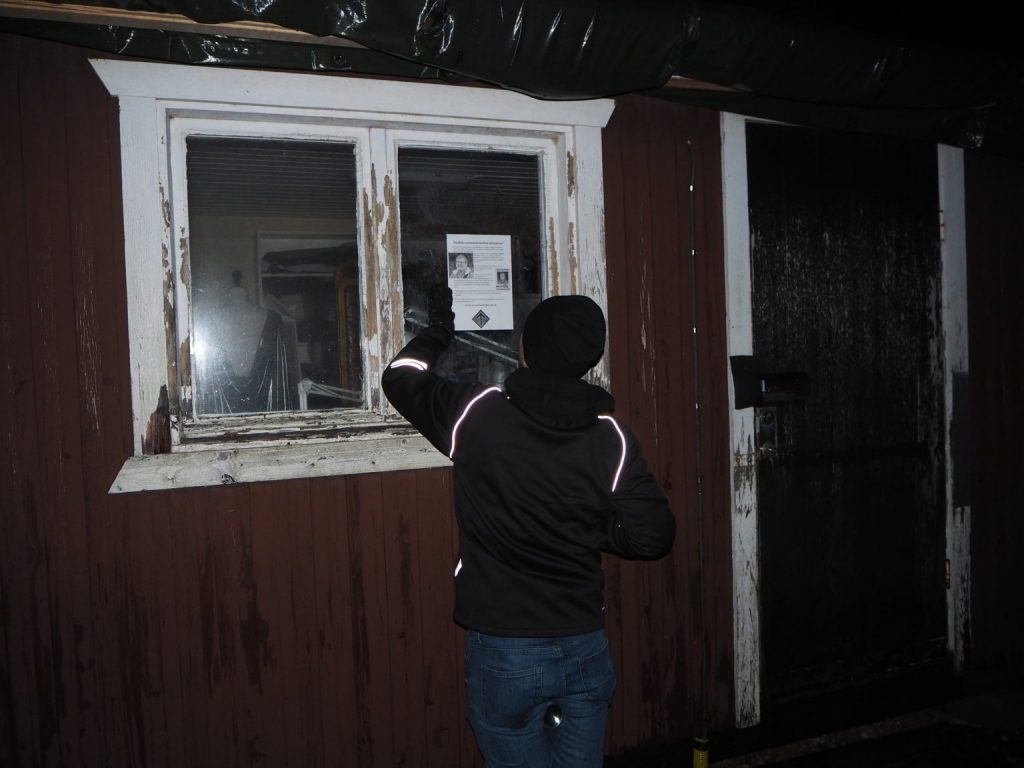 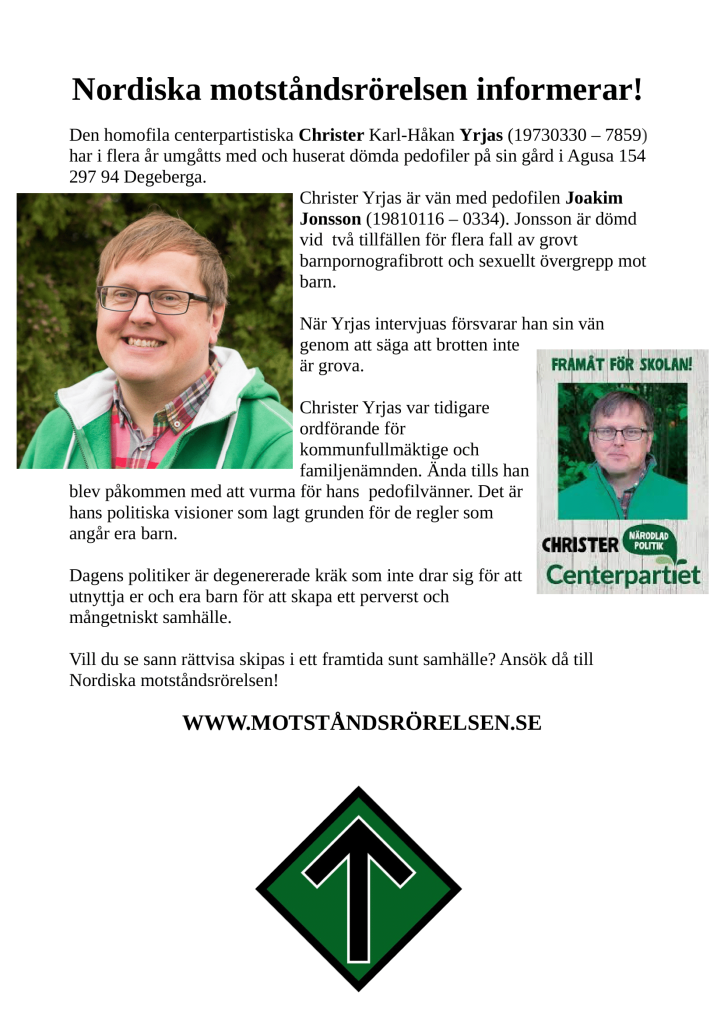 Information from the Nordic Resistance Movement!

For several years, the homosexual Centre Party member Christer Karl-Håkan Yrjas (19730330 – 7859) has associated with and housed convicted paedophiles at his farm in Agusa 154 297 94 Degeberga.

Christer Yrjas is friends with the paedophile Joakim Jonsson (19810116 – 0334). Jonsson has been convicted on two occasions for several cases of serious child pornography offences and sexual abuse of children.

When Yrjas was interviewed, he defended his friend by saying the crimes were not serious.

Christer Yrjas was previously the chairman of the municipal council and the family committee – until his proclivity for paedophile friends was discovered. His political visions laid the foundation for the rules that affect your children.

Today’s politicians are degenerate scum who do not hesitate to exploit you and your children to create a perverse, multi-ethnic society.

Do you want to see true justice administered in a healthy future society? Then apply to join the Nordic Resistance Movement!

After the leaflet distribution in Agusa, the activists went to Tomelilla and placed posters on the town hall, where Yrjas had previously worked and spread his degenerate Centre Party politics. Leaflets were also delivered to residents living near the town hall. The activists took this action because the municipal director and politicians in Tomelilla didn’t sufficiently distance themselves from their former municipal council chairman Christer Yrjas. 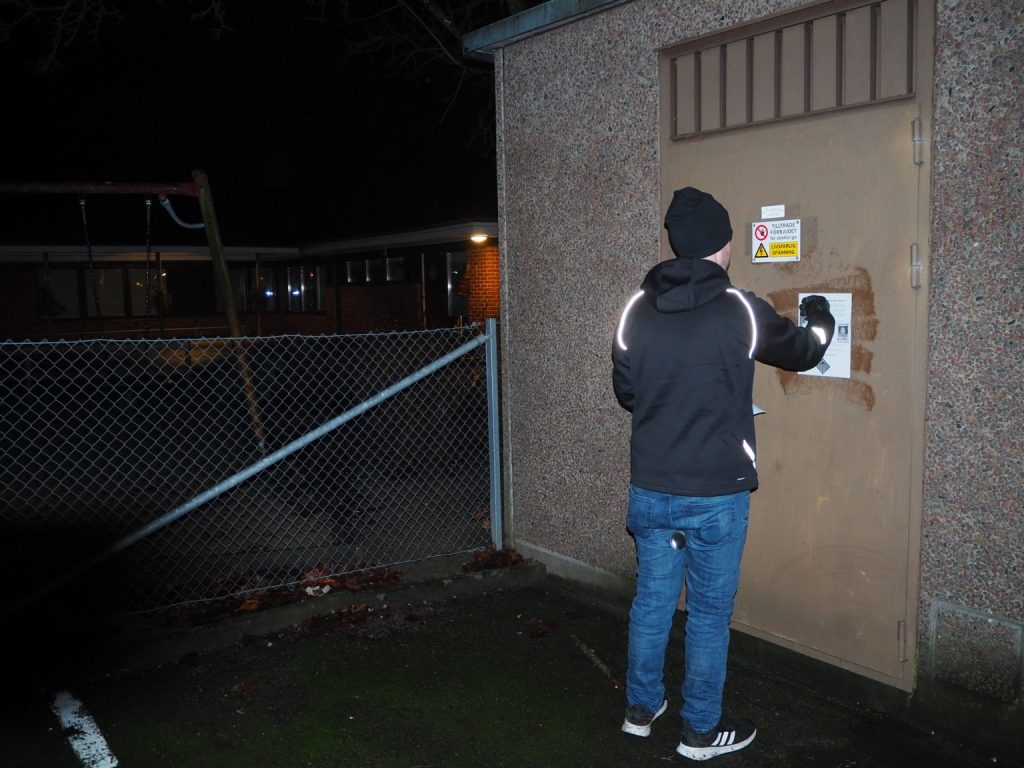 For the same reason, posters were also placed at a preschool near the town hall.