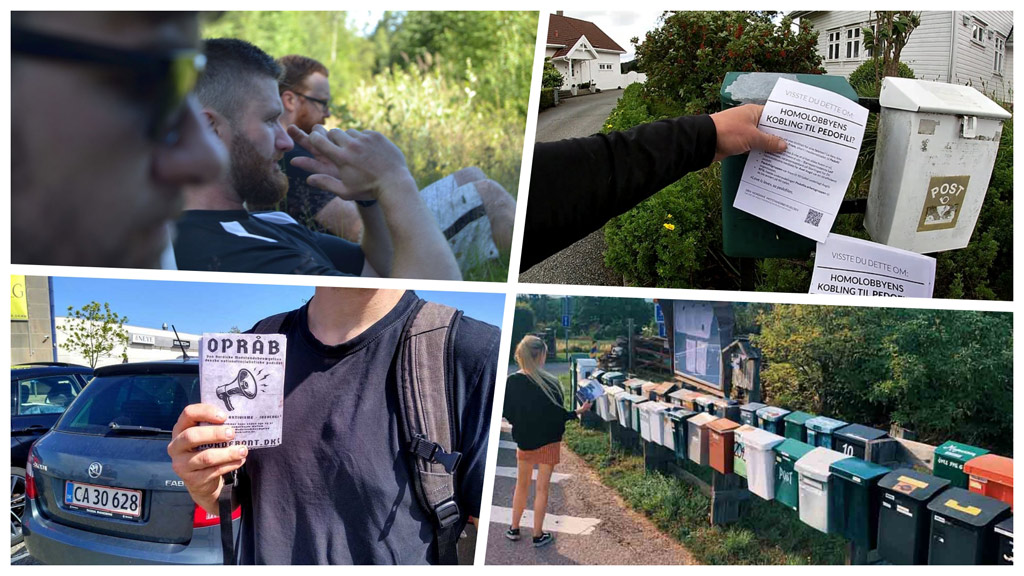 Group training and education in Nest 5

Members from Nest 5’s Activist Group met in the Ludvika area on 25 July for fitness training and some strength training, followed by reading an old but relevant edition of Budkavlen.

The fitness training lasted about two hours, and mixed sprint intervals on slopes with jogging on forest trails. In between, parts of the activist test were performed, including push-ups, sit-ups, back raises and more.

The group then read an edition of Budkavlen, an internal publication focusing on various subjects relating to the Resistance Movement. This edition was short but still made for extensive and beneficial discussions.

Members of Activist Group 201 and a supporter member met in Kungälv on 27 July to spread the message of the Nordic Resistance Movement to the people.

Approximately 500 leaflets were given out to houses and flats in the Munkegärde area. Fellow countrymen who were out walking or working in their gardens were handed leaflets directly, with the majority gladly accepting them. 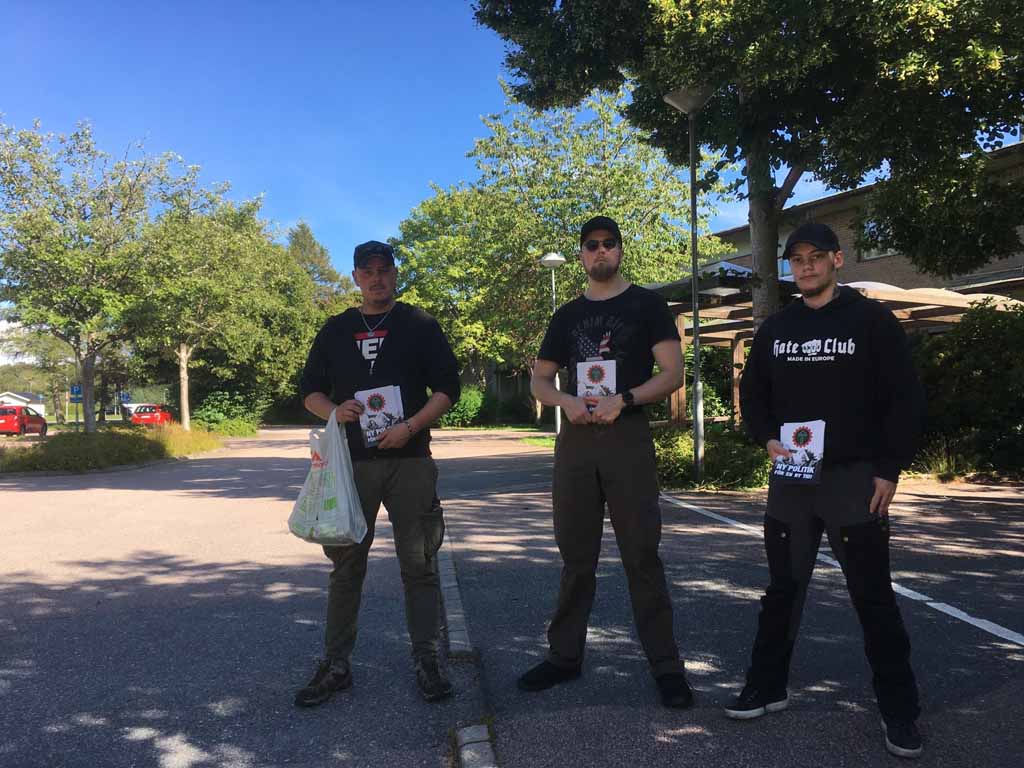 Leaflets were delivered in Borgholm on Öland on 27 July. 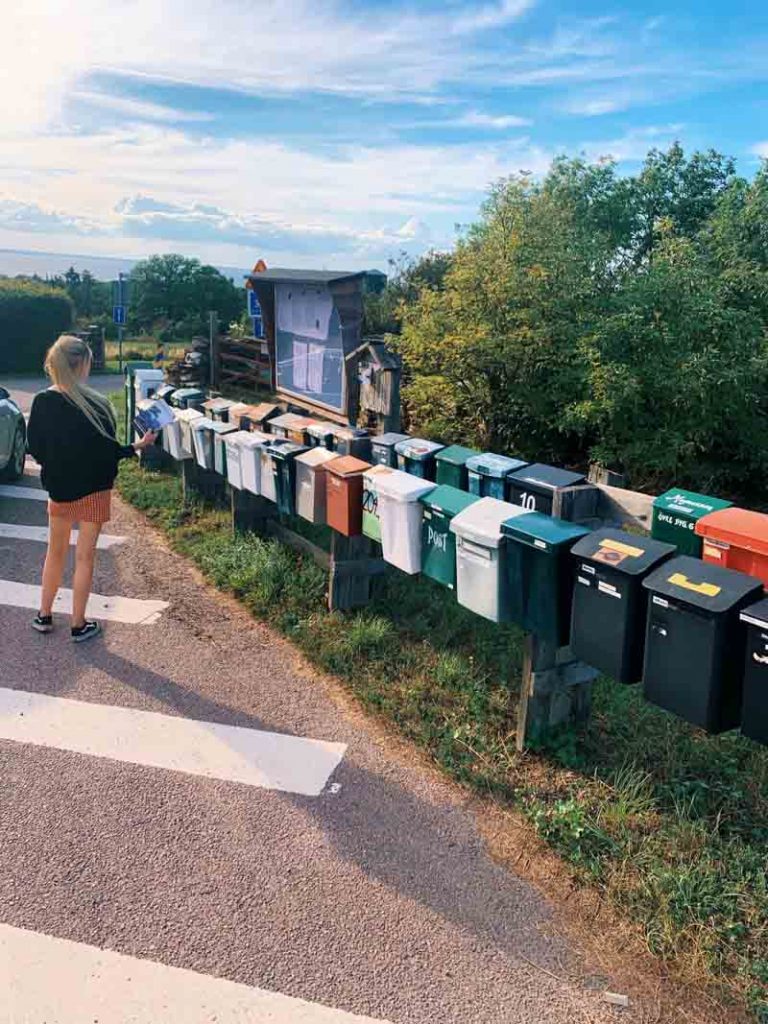 Members from Nest 1 went to Tyresö on 27 July and delivered leaflets to residents in the area. 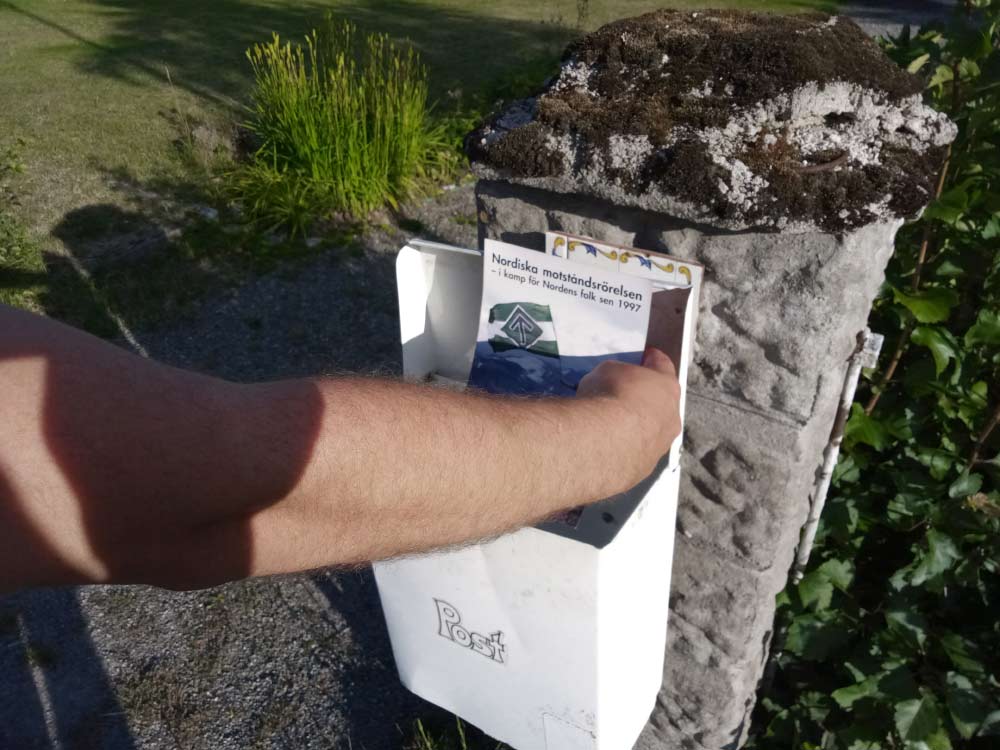 Comrades from Nest 1 were in Norra Sköndal in Stockholm on 23 July to deliver leaflets to local people. 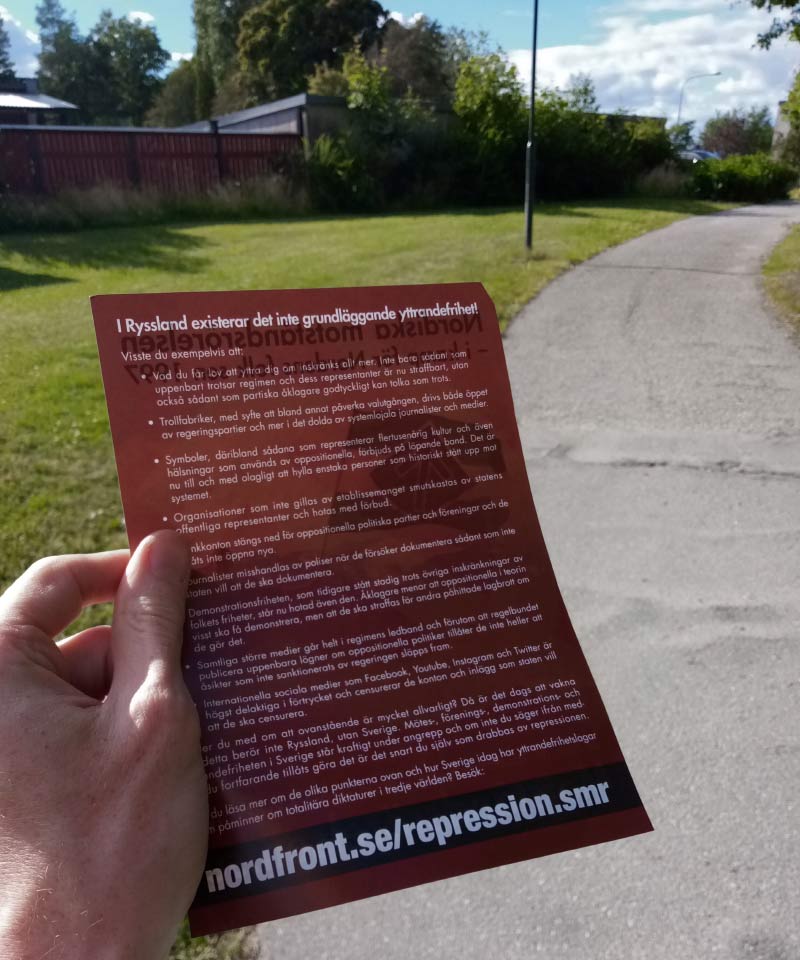 Banners were put up in various places in Karlstad by Member Group 2 in Nest 5 on 20 July. Some “Pride benches” also ended up in a lake, and an EU flag was taken down.

A large number of stickers were spread along Södra Promenaden, Ljura and Klingsberg. Lampposts were also cleaned of communist propaganda.

Day of activities in Nest 5

Members of Nest 5’s Activist Group met for a demanding training session that included activities such as running, rope climbing and overturning tractor tyres. They also practised self-defence and experienced what it’s like to be pepper-sprayed. Later the comrades enjoyed a barbecue and held a group meeting.

Propaganda continued to be spread in Luleå on 29 July. A large number of stickers were spread around the city, and the anti-Nordic Social Welfare Service office was cordoned off.

Activists and members met in Nest 8’s banner production workshop on 27 July. New letter templates and banners were produced that will soon be seen on the streets and town squares.

Members from Nest 7 held a leaflet distribution in Bredaryd on 26 July. 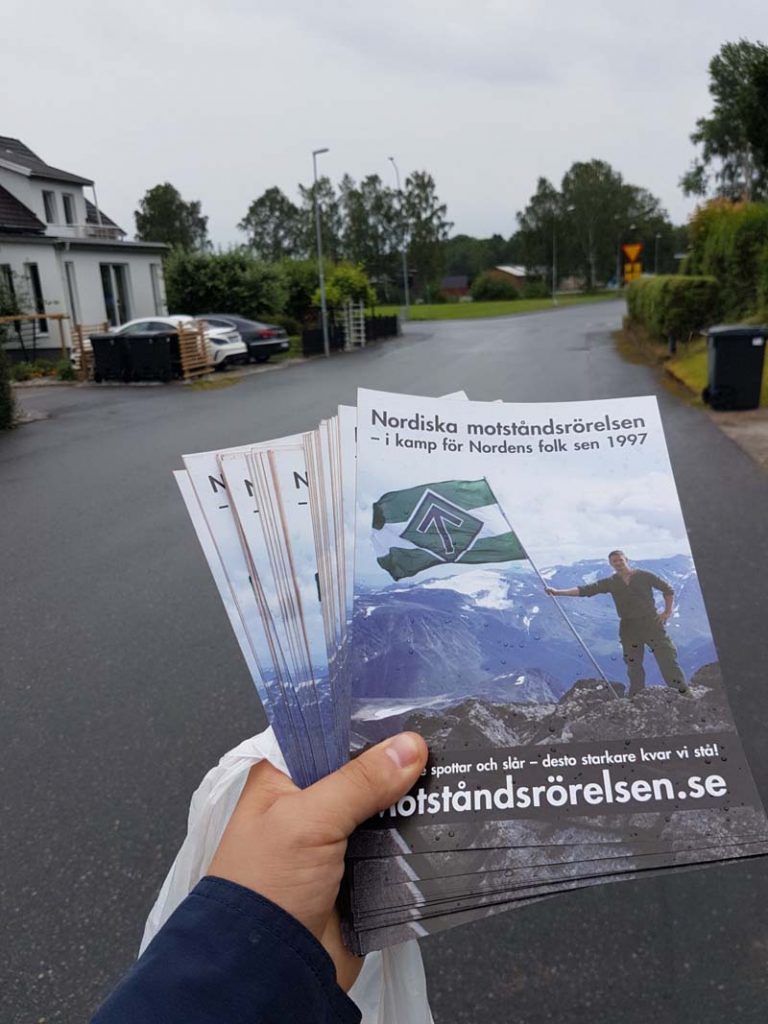 Members of Nest 5’s Activist Group met to train in martial arts on 1 August. They practised various punching techniques and combos before testing them in a sparring session. The activity went well, with the participants enjoying the sunny weather.

Stickers were put up in Borås on the last day of July.

Nordic Resistance Movement activists held an action against multiculturalism at a school in Aarhus after yet another attack on a young white person. 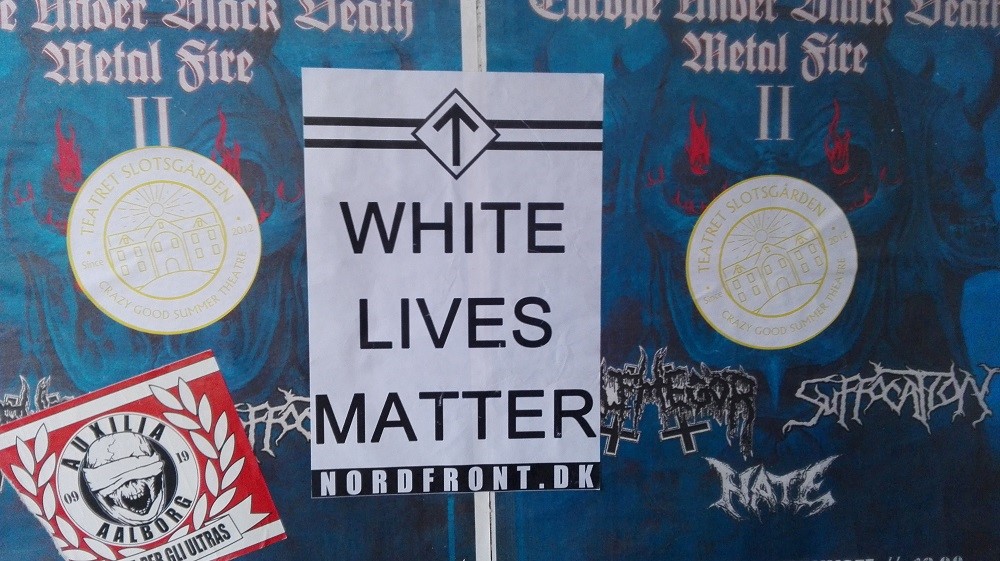 Activists were in Herlev to put up Nordic Resistance Movement stickers.

The Resistance Movement held a propaganda offensive in Kristiansand and the nearby area on 21 July.

Large posters with the message “Against globalism! For a free and united Nordic Nation” and “Enough lies! Read the truth about the holocaust on Frihetskamp.net” were put up.

Posters and leaflets in Lura, Varatun and Trones

Posters were put up in Lura, Varatun and Trones in Sandnes Municipality, and a large number of leaflets about the homo lobby’s connection to paedophilia were distributed.

A large number of stickers were distributed in the heart of Reykjavik. 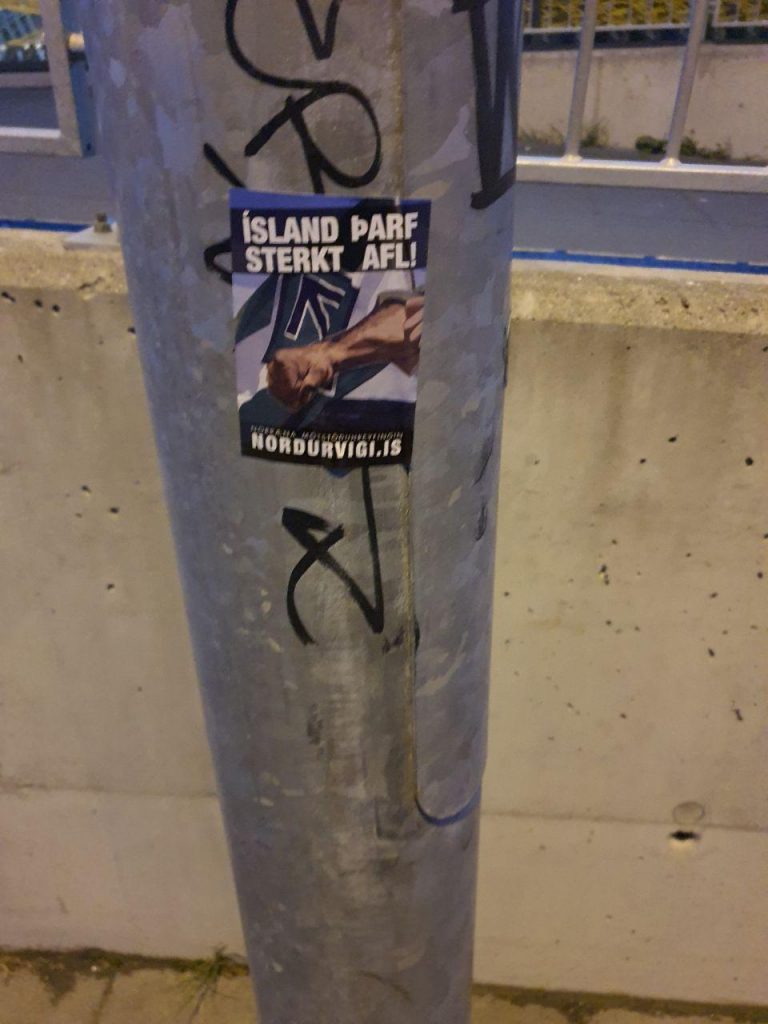